Despite last weekend’s debacle now infamous debacle, Hot 97’s annual Summer Jam is no stranger to controversy.  Hip-Hop is nothing if not provocative.  Rappers are habitual envelope pushers, and will do just about anything to get a reaction from fans.  Sometimes that tendency can get out of hand. In such moments, the powers-that-be step in and set clear boundaries. Nas found that out a decade ago, when he attempted to use the Summer Jam stage to decimate a popular opponent. 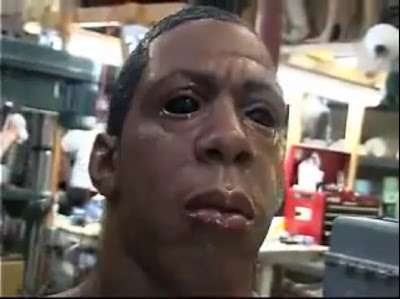 By the spring of 2002, the beef between Nas and Jay-Z had long since reached its zenith.  On his classic album The Blueprint, Jay-Z had unleashed “Takeover.”  The third and final verse was a rather ironclad indictment of Nas.  In response, Nas released the now infamous “Ether,” which many now see as having delivered the winning blow.  However, the coup de grâce was yet to come.  Nas had something special in mind for his enemy.  To add insult to injury, he even took a page from his enemy’s playbook.

At the 2001 Hot 97 Summer Jam, Jay famously humiliated Mobb Deep member Prodigy.  During his set, Jay had the screen on the main stage show a couple of embarrassing pictures. Both showed Prodigy as child.  One had him dressed as Michael Jackson.  The other showed him in a ballerina outfit.  The effect on P’s image was both instantaneous and devastating.  Nas had something much worse in mind for Jigga.  Mr. Jones was going to hang him in effigy at the 2002 Summer Jam.  Upon hearing about this little stunt, Roc A Fella put pressure on Hot 97.  As a result, the station refused to approve the mock lynching.  Infuriated, Nas refused to perform, and aired his grievances over at rival station Power 105.1.

A rare and revealing behind the scenes featturette has recently surfaced online.  It shows just what Nas had in store for Jay.  Special makeup FX artist Michael Burnett was commissioned to put together an animatronic figure of Jay-Z.  The animatronic figure was then to be put on a gallows and hung.  All of this effort turned out for naught, as the effect was never used.  Watching this video today, one can only be thankful that the effect was never allowed to see the light of day.  It’s quite disturbing to see a group of white FX artists helping one black man to lynch another in effigy.  Even creepier are the black eyes of the animatronic figure, which lack either whites or pupils.  It looks like a cross between Jay-Z and a Roswell alien.

Of course, none of this should come as a real surprise to a truly knowledgeable Nas fan.  This is the same guy that once boasted about snuffing Jesus.   He also tried to name one of his albums the N-word.  Sometimes, he just doesn’t know when to quit.  I guess that’s one of the many quirks that go along with being a gifted lyricist.  Even a genius needs to be reigned in at times.