Last August, the pilot episode for Black Dynamite: The Animated Series premiered on adultswim.com.  Some thought its brand of raunchy humor much too crude, and its zany tone over the top.  I found it to be aggressively faithful to the source material.  I’d even argue that it’s exactly what Michael Jai White and Scott Sanders would’ve done with the live-action film had he been given a larger budget.  I also figured that the pilot was merely a taste of the sheer insanity to come, seeing as how a full season of shows would only push farther in the same Looney direction.  As I suspected, the full trailer for Black Dynamite: The Animated Series indeed promises a walk down the wild side. 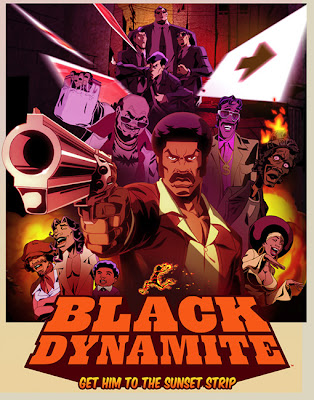 Set to the adrenalized strains of Johnny Pearson’s “Action in Memphis,” the trailer begins with the same toast that Bullhorn (Byron Minns) recited over the opening credits of the live-action film.  In the movie, Michael Jai White’s characterization of Black Dynamite was a composite of all his favorite Blaxploitation heroes.  He parodied the attitude and mannerisms of Blaxploitation icons like Jim Brown and Jim Kelly. The animated series takes the aforementioned humorous exaggerations to a ridiculous extreme.  Via the show’s character design, Black Dynamite becomes a caricature of a caricature.  His eyes constantly threaten to pop out of his head.  His Kung-Fu moves defy the laws of physics and gravity.  In fact, the action during the trailers opening calls mind Kung-Fu Joe’s confrontation with the police in I'm Gonna Git You Sucka.

As the trailer continues, Bullhorn goes into an extended version of his toast as Black Dynamite takes on ninjas and steps on the Disco 'Round.  There’s a hilarious moment at the 36 second mark that one-ups the group sex gag from the movie’s pre-opening credits sequence.  From what I can see in this trailer (and remember from the online premiere of the pilot episode) Black Dynamite is even better suited for animation than he is for live-action. If the movie was a pleasant surprise, than the cartoon will surely be a shock to the system.  As Black Dynamite becomes more of a multimedia property, the possibilities for the character continue to blossom.  It looks like MJW and company are taking full advantage of each new opportunity given them.  This might turn out even better than The Boondocks.