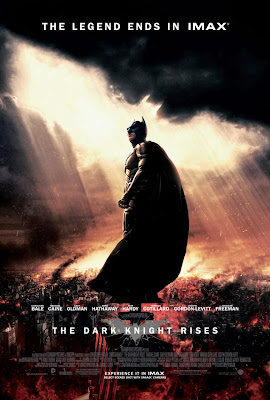 Since hanging up the cape and cowl, the billionaire playboy has become a reclusive cripple.  However, a chance meeting with a lovely and exceptional thief named Selina Kyle coaxes him out of a self-imposed exile.  He puts his detective skills to work, and discovers Ms. Kyle to be a cog in much larger machine.  Sitting at its controls is Bane, a fearsome terrorist leader who means to raze Gotham City to the ground.  Once again, The Batman is needed.  Can Bruce rise up from the depths of despair meet the challenge that lies ahead?

The Dark knight Rises is the long awaited conclusion to Christopher Nolan’s “Dark Knight Trilogy.”  It easily dwarfs its predecessors in terms of size and scope, showing itself to be the most ambitious of the three.  That ambition, like so many other elements of the film, proves to be a double edged sword.  On the one hand, it liberates the film from the conventions of superhero cinema.  On the other, it proves to be an albatross.  The film bears the weight of this self-imposed burden while valiantly pushing onward towards the finish line.

With each successive entry of Nolan’s trilogy, the setting and production design have expanded to accommodate his vision.  The city of Chicago featured prominently in both Batman Begins and The Dark Knight.  Its criminal lore greatly informed the plot of the latter, which was clearly inspired by The Untouchables.  In the Dark Knight Rises, the windy city has been supplanted by Pittsburgh, New York, and Los Angeles.  There are obvious parallels to the former during the Guiliani administration, which ties into Nolan’s ongoing allegory to the war on terror.  Just like New York City in the weeks and months preceding 9/11, Gotham basks in the possibilities of a brighter tomorrow.  Those hopes are dashed with the emergence of Bane.

Nolan and his cinematographer, Wally Pfister, have applied some much needed discipline to their visual style.  The shots are steadier than ever before, resulting in a strikingly epic look.  Unfortunately, the newly stationary camera proves to be both a blessing and a curse for the film’s fight choreography.  The Batman is revealed to be an unimaginative night brawler, relying on haymaker punches and the like.  While this is a bit frustrating from an aesthetic standpoint, it is admittedly consistent with this particular iteration of the title character.  Bruce’s fighting style seems to grow out of his own bullheadedness.

That little nuance comes into play during Batman’s confrontations with Bane.  The character is the living embodiment of physical intimidation.  The cinematography, coupled with the costume design and Tom Hardy’s bulked-up physique, create an undeniably menacing presence.  The vocal effects applied to Tom Hardy’s voice make him sound like Darth Vader.  He even seems to have affected Sean Connery’s Scottish accent.  During his monologues, he takes on the air of a brutal ringmaster.  While effective, he feels a bit incomplete when compared to the likes of The Joker and Rha’s Al Ghul.  One never gets a clear idea of what his long term plans are.

The screenplay incorporates elements of such well known story arcs such as “Batman: The Dark Knight Returns,” “Knightfall,” and “No Man’s Land.”  It also remains doggedly true to the core themes established in Batman Begins and The Dark Knight.  As a result, the film often feels overstuffed and disjointed.  It bursts at the seams with ideas, sometimes threatening to buckle under its own weight.  The doomsday scenario established in the final act feels abbreviated.  Matters are not helped by Nolan’s tendency toward obvious symbolism.  Still, his dedication to his vision sees the film through, consequences be damned.

Nolan’s dedication is mirrored by the principle cast.  Catwoman is nicely implemented into the pseudo realistic universe he’s created.  Her inclusion is handled with a certain modicum of restraint.  Her origins are not explored, and no explanation is given for her considerable skills.  Like Heath Ledger’s Joker, she simply is.  As always, Michael Caine provides the films emotional core, proving to be the sole “voice of reason” in Bruce Wayne’s world.  Christian Bale’s incessant brooding instills a certain level of sympathy for the title character.  We want to see him succeed, despite the fact that he isn’t much fun to be around.

When looking back on The Dark Knight Rises, there are many parallels between Christopher Nolan and Bruce Wayne.  Both men are visionaries with limitless resources at their disposal, and they both exhibit a dogged determination that ultimately pays off.  They paint themselves into a proverbial corner, yet are able to defiantly fight their way out.  Having reached the inevitable end game, Nolan’s vision is now complete.  The Dark Knight Rises doesn’t quite barrel through the finish line as expected, but it still emerges triumphant, and wearing it’s battle scars with pride.  To an extent, it succeeds in spite of itself.