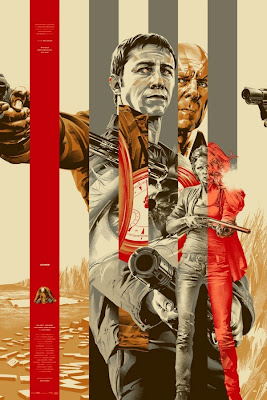 Eventually, the day comes when each looper is expected to kill their future selves, thus “closing the loop.” One such looper is Joseph “Joe” Simmons (Joseph Gordon-Levitt).  However, when the time comes to close his own loop, Joe hesitates, along his 55 year-old self (Bruce Willis) to escape.  This not only voids Joe’s contract with the crime syndicate, but makes him a marked man.  He hopes to save face by tracking down his older self, but this proves much easier said than done.

Looper is the third feature film from writer/director Rian Johnson.  It’s a sci-fi actioner that involves the concept of time travel.  That puts it squarely in the same genre as films such as The Terminator or 12 Monkeys.  Though it shares some obvious similarities with those films, Looper is very much its own animal.  It not only contemplates plot intricacies and paradoxes, but how such things affect the characters on a human level.

Looper takes place in a future world, but much of the production design suggests the American Old West.  The story takes place in Kansas City, which has a suitably futuristic skyline.  Take a closer look, and the details begin to emerge.  The Mecca rests in the middle of a veritable no man’s land, like a frontier town hidden in the desert.  Those who higher on the economic food chain can afford hover bikes that look like steampunk choppers.  Professional criminals carry large, powerful six-shooters like cowboys.  The loopers themselves carry a futuristic variation of the old blunderbuss flintlocks.  This retro fantasy world is the kind of future that George Lucas has always championed. It looks and feels used.

As with any western, the plot of Looper facilitates an inevitable showdown between a good guy and a bad guy.  The twist here is that both the antagonist and protagonist is actually the same person.  The hero is fighting himself in the literal sense.  That little conceit opens up a number of tantalizing possibilities that Looper is only too glad to explore.  That kind of thematic brevity is a big part of its appeal, yet the film also has a sense of restraint.  It leaves enough to the imagination to keep truly thoughtful viewers engaged.

The central conflict is allowed to evolve as the narrative progresses, as are the characters themselves.  Unlike so many other films of its type, Looper isn’t just empty spectacle. The characters are allowed to have actual arcs that go beyond mere plot resolution.  They are morally complex, occupying different ends of the moral spectrum at different times in the narrative.  Even their most deplorable actions can be understood if not condoned.  No matter how complex the plot or elaborate the set pieces, Looper never forgets what it’s actually about, and that is a blessing.

One of the many joys of the screenplay is how Rian Johnson subverts the tropes of various genres.  Looper is equal parts time travel yarn, western, and superhero movie.  Those hidden identities gradually, and are handled in a number of unusual ways.

The cast is simply great.  Bruce Willis looks less like the scrappy action hero of his younger days, and more like a grizzled shell of his former self.  He’s tougher, more world weary.  His appearance, coupled with the story’s context, gives his screen persona added weight this time out.  Levitt, with the help of some very subtle makeup, looks like the younger Bruce Willis that might’ve existed in some alternate reality.  He successfully mimics the mannerisms of his costar, yet his performance is much more than an impersonation.  Both versions of Joe seem like the same person, but at very different points in life.  Child actor Pierce Gagnon is not the usual precocious type.  As Sid, He turns in a performance so creepy and effective that he often seems like a grown man in a child’s body.  As Sara, Emily Blunt is a more complex version of Sarah Conner as depicted in Terminator 2: Judgment Day.

Looper is a masterpiece, bar none.  It represents a new level of sophistication for a sub-genre that already has its fair share of notable classics.  It’s everything that the best kinds of blockbusters should be, straddling the line between pulpy fun and thought provoking art.  It doesn’t achieve that feat through gimmickry, but through great writing, acting, and direction.  I doubt that a better time travel flick will emerge for quite some time.