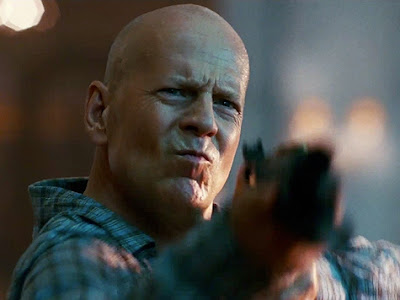 This time out, John McClane travels all the way to Moscow, where his son is being detained.  Of course, he winds up taking on an entire army.  Plenty of gunfire and explosions ensue.  The trailer opens mysteriously.  On a snowy night, a helicopter drops off some cargo in front of a building (Presumably in Moscow).  A team donning military issue hazmat suits investigates.  Strains of “Ode to Joy” can be heard, so as to inspire false hope in die-hard fans (pun very much intended).

After the 20th Century Fox logo appears, there’s a brief montage that would be right at home in a Bond film.  After that is the requisite money shot: John McClane racking a pistol grip pump.  From there, it goes into apocalypse mode, showing all manner of random destruction.  It ends with one of McClane's penchant quips.

Honestly, this actually looks pretty good.  That being said, I could care less.  The original Die Hard is one of my very favorite films, but this franchise needs to be taken out to pasture.  It’s gotten so far away from its initial premise that it’s not even funny.  McClane is not a globetrotting adventurer with a license to kill.  He’s a blue collar guy that keeps getting caught in the wrong place at the wrong time.  He doesn’t seek out trouble.  Trouble finds him.  That’s the guy I rooted for 24 years ago.  Apparently, he won’t be showing up for A Good Day to Die Hard.