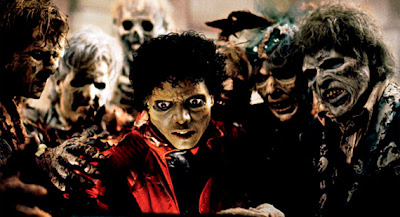 We’ll also be discussing the scariest songs of all time!  Is it even possible for a rap song to be truly scary?  Does “Mind Playing Tricks on Me” hold the title as scariest rap song ever?  Did the video for "Thriller" scare you as a child, or were you too busy dancing?  What’s the scariest movie score ever written?  Is John Carpenter’s Halloween theme scarier than “Tubular Bells?”  What about the theme from Jaws?

We also celebrate the 25th anniversary of Kathryn Bigelow’s classic vampire yarn Near Dark.  Does it still hold up?  How does it compare to modern vampire films like the Twilight series, or the Underworld franchise?  Should modern action/horror films return to this kind of filmmaking?  Does it work better as a Western, or as a horror film?  Being that it was released the same year as The Lost Boys, which film has stood the test of time better?  Is Kathryn Bigelow one of the best action directors to emerge in the last 30 years?   How do the performances of Lance Henriksen, Bill Paxton, and Jennette Goldstein compare to the ones they gave in Aliens?

Listen to internet radio with Scottscope on Blog Talk Radio
Posted by Unknown at 6:03 PM