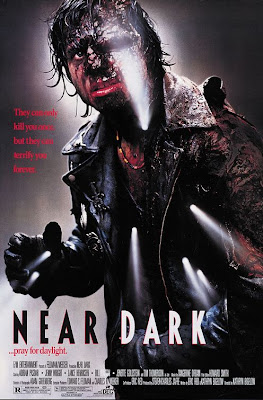 Caleb Colton (Adrian Pasdar) is a small town guy on the prowl.  He sets his sights on Mae (Jenny Wright), a beautiful young drifter who wanders into town.  She turns out to be much more than expected, as their brief encounter leaves Caleb a changed man.   He develops a severe aversion to sunlight, and has acquired a ravenous thirst that can’t be quenched by conventional means.  Before he can assess his situation, he’s taken hostage by Mae’s traveling companions.  They suffer from a similar affliction to the one that has overcome Caleb, yet they have learned to adapt.  They give him an ultimatum: evolve or die.  While Caleb endures a trial by fire, his father and younger sister conduct a frantic search for him.  Can they reach him before he loses his soul?

Kathryn Bigelow and Eric Red both had an affinity for westerns.  However, the genre had fallen out of popular favor by the late 1980’s.  Studios would never pony up the cash for such a film, much less one by a pair of relative newcomers.  Upon the suggestion of a colleague, this ambitious pair decided to go a different route.  Maybe they could find funding for a film that spliced the tropes and archetypes of the Old West with those of another genre.  Perhaps taking the success of Fright Night into account, they decided on Vampires.  Though Vampires and cowboys might make for strange bed fellows, such a combination opened up a number of possibilities.  Not the least of which is a new kind of genre deconstruction.

The film’s meager budget didn’t allow for an A-list cast.  Luckily, Bigelow was involved with writer/director James Cameron at the time.  She cherry picked the supporting cast of his recent hit, Aliens. It happened to be populated with a number of talented character actors, who could lend her project an air of genre credibility.

Perhaps the most intriguing thing about Near Dark is how it combines the sensibilities of its chief architects.  In the case of the Bigelow, it foreshadows themes and ideas that would surface later in her filmography.  In the case the Red, it would further examine themes and ideas that had already appeared his previous work.  In the end, both sets of sensibilities would prove complimentary to each other.

The year before Near Dark’s release, another film scripted by Eric Red was released.  The Hitcher was as brutal a thriller as had ever been conceived.  It told a simple yet horrifying story.  One rainy night on a lonely stretch of road, Jim Halsey (C. Thomas Howell) picks up a hitchhiker.  The mysterious loner, who goes by the name of John Ryder (Rutger Hauer), turns out to be a serial killer.  Upon revealing his true identity (and murderous intentions) to Halsey, the young man kicks him out of the car.  This initiates a sick game between the two men, which quickly becomes an epic test of wills.  Ryder fixates on Halsey, framing him for a number of murders.  There are very subtle implications that Ryder may indeed have supernatural abilities.

The Hitcher bears a number of obvious similarities to Near Dark, not the least of which is its setting.  Both films offer a protagonist that unknowingly finds trouble.  Halsey stumbles into it via bad playing the Good Samaritan, while Caleb does so by giving into his carnal urges.  In Caleb’s case, the resulting predicament could be read as a form of comeuppance.  Halsey is locked into a toxic relationship against his will.  The possibility of obliging, or in any way joining forces with Ryder, never enters his mind.  Meanwhile, Caleb is compelled is compelled to give in to his bloodlust, though his humanity keeps him from crossing that line.

Ryder seeks to “turn” Halsey.  He is intrigued by the young man’s tenacity, and wants to pass on his psychosis as though it were some sort of mantle.  Something similar occurs between Mae and Caleb.  She seeks a companion, but the only way she can have this is to pass on her “sickness.”  The sickness in this case is much more literal than the one exhibited by Ryder.  Whereas the supernatural elements of The Hitcher remain largely sub-textual and implied, those of Near Dark are placed front and center.  Mae’s surrogate family initially views Caleb as unnecessary baggage.  They demand that he prove himself worthy.  If he fails, he will be killed.  Ryder offers Halsey a similar choice, but the exact parameters of their arrangement go largely unspoken.

The group/family dynamic that exists within Near Dark’s band of vampires is where Kathryn Bigelow’s sensibilities come into play.  They are roving and nomadic in nature, constantly on the move and careful not to attract attention from the law.  They each adhere to the roles that said family dynamic requires of them.  Jesse Hooker (Lance Henriksen) is undoubtedly the father figure and leader.  Diamondback (Jenette Goldstein) is the mother.  Severen (Bill Paxton) the eldest son, and Homer (Joshua John Miller) his younger brother.

Bigelow’s later work would reveal a fascination with makeshift family units such as the one in Near Dark.  It would also examine the initiation rites of various subcultures, portraying them as modern warrior tribes.  The vampires of Near Dark are similar to the crew of surfing bank robbers from Point Break.  Just as Johnny Utah (Keanu Reeves) falls under the spell of Bodhi (Patrick Swayze), so does Caleb under the spell of Mae.

In the films of Kathryn Bigelow, adrenaline is just as viable and addictive a narcotic as cocaine or heroin.  Near Dark explores this theme via the bloodlust of its vampires.  Though it functions as a means of nourishment and sustenance, the means by which the blood is attained provides a rush all its own.  This is revealed when the Vampires are shown in predatory mode.  They are creative with their kills, which provide them with a source of both levity and recreation.

The scene that best shows these creatures in their element is late night massacre at a country and western bar.  The vampires prolong the inevitable by toying with their victims.  Since the bar they happen upon is located in the middle of nowhere, they can take their sweet time.  No one is coming to the rescue.  The scene has echoes of A Clockwork Orange, where Alex and his Droogs revel in gang rape and various other acts of violence.  Thus, vampirism is deconstructed, and in the process becomes a form of psychosis.  In normalizing and demystifying vampirism, Bigelow and Red actually make it more terrifying.  It becomes analogous to real world horrors.  Psychopathic killers roaming Middle America and slaughtering people is a very real possibility.

Bigelow and Red further demystify vampirism later on in the film, during its most staggering action set piece.  The vampires find themselves cornered in a hotel room, while the local authorities stage a daylight ambush.  This gives Caleb a chance to prove his worth.  He dashes out into the sunlight, risking life and limb to rescue his comrades Jesse and the rest of the gang.  In this instance, the Vampires become a band of outlaw fugitives, similar to those of the old west.

Upon its release, Near Dark got lost in the proverbial shuffle.  The Lost Boys offered something much more obvious and immediate.  Audiences received it enthusiastically.  By comparison, Near Dark remained in the shadows.  It wasn’t interested in voyeurism or wish fulfillment.  It didn’t provide viewers with an attractive fantasy world.  It was rooted in real world fears.  These vampires weren’t members of a hair metal band.  They were addicts and sociopaths that existed on the fringe of society.  That is far scarier than anything Joel Schumacher could offer.