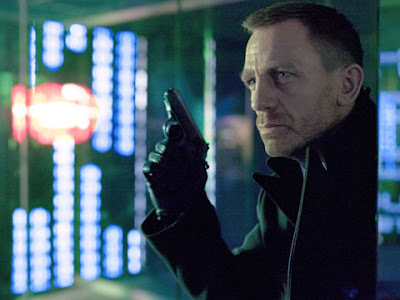 Skyfall is the 23rd James Bond film from Eon productions.  It marks Daniel Craig’s third outing as the most famous agent provocateur in cinema history.  It also comes four years after the particularly dreary Quantum of Solace, which squandered most of the good will generated by Casino Royale.  The franchise must again prove itself to a cynical and jaded public.  In the past, it has done so by appropriating the trends of the day.  This time out, director Sam Mendes eschews that derivative approach for something far more basic, but exponentially more effective.

The film benefits greatly from the pairing of director Sam Mendes and cinematographer Roger Deakins.  Mendes is the man behind 1999’s Oscar winning American Beauty.  Deakins is a frequent and favored collaborator of the Coen Brothers.  Together, they have crafted perhaps the best looking Bond film to date.  They remain true to the series’ penchant for globetrotting, offering a handful of varied and beautiful vistas.  The film moves from the neon lit skylines of Shanghai to the lush, mountainous regions of rural Scotland.  If nothing else, Skyfall will be remembered as an extravagant travelogue.

The emphasis on visual splendor is also evident during the fight scenes.  Most of them take place in an exotic setting or in front of a dazzling backdrop.  These shots are so meticulously composed it’s as if Sam Mendes and company can’t bear to see them butchered by shaky camera work and choppy editing.  Every inch of the frame is visible, and the momentum of the fight remains intact.  The camera remains calm, even when the characters on screen are hopped up on adrenaline.  None of the fight choreography is squandered.  The film’s pacing is steady and unrushed, but never slow or laborious.  Skyfall opens with an elaborate set piece, yet it avoids the fatal mistake of peaking too early.  Smaller, more intimate confrontations are strewn throughout the second act.

An already palpable sense of tension is further enhanced by a deceptively simple plot.  Skyfall certainly conforms to the Bond blueprint, hitting all of the necessary beats along the way.  However, it manages to do so with clarity and a sense of purpose.  The third act, which echoes the structure of classic westerns, serves as a perfect example of how efficient the film is.  The villain has a simple and clear cut goal.  The family dynamic that develops between Bond, Silva, and M is fascinating, and feels dramatically weighty.

As far as villains go, Raoul Silva is one for the record books.  Javier Bardem excels at playing eccentric sickos, as evidenced by his Oscar-winning turn as Anton Chigurh in No Country For Old Men.  Silva is a bit more fleshed out than Chigurh, as he comes with a chilling backstory.  His motivations can be understood if not condoned.  He might even be sympathetic if not for his all-encompassing creepiness and sadism.  Bardem is clearly channeling Heath Ledger’s Joker, to equally effective results.  Daniel Craig is as grizzled as ever, yet still retains enough swagger to be believable as a suave ladies man.  Naomi Harris exudes sex appeal, yet not in a submissive sense.

Skyfall is an even better reboot than Casino Royale.  It offers the bare essentials of the Bond mythos, while being a very strong action film in its own right.  It’s also the most accessible Bond film in quite some time.  One needn’t be a fan of the series to partake of its many pleasures.  If the franchise stays its current course, the sky is most certainly the limit for this prototypical action hero.