The teaser trailer for Man of Steel left me quite cold.  As a friend humorously observed, it looked more like a Levi’s commercial than an advertisement for an upcoming Superhero film.  To make matters worse, I am of the minority viewpoint that it’s much too soon to release another Superman movie, much less one that takes a “dark and serious” view of the character.  Bryan Singer already attempted something along those lines in 2006 with Superman Returns.  The result was a dreary yet great looking film which cast portrayed the character as a love struck stalker.  That’s hardly the kind of adventure that fans were expecting.  I’m hard pressed to believe that Zack Snyder could do much better, Christopher Nolan’s involvement notwithstanding.   Such reservations aside, the new trailer for Man of Steel has me rethinking my initial assumptions. 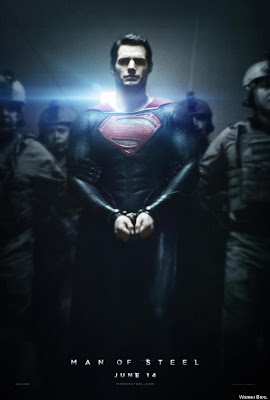 The trailer opens in a shroud of mystery.  Via voiceover, a mother comforts her child in a most therapeutic fashion.  A transient looking Clark Kent is shown unconscious and sinking underwater as flames billow overhead.  The viewer is shown flashes of a teenaged Clark Kent performing what appears to be his first superheroic feat.  At the 1:10 mark, the instantly recognizable Superman logo is revealed.  Just after that, the trailer presents its most stunning and memorable image.

Superman is shown walking alone in a mountainous landscape somewhere in the North Pole, his red cape billowing in the wind.  He pauses and kneels on the ground, placing his right fist before him.  The ground begins to shake, causing small rocks and other earthly particles swirl about in a rippling fashion.  Then, Superman suddenly darts into the air, causing the earth that was previously beneath his feet to crack.  As he ascends into the heavens, he breaks the sound barrier.  It’s a glorious sight that perfectly captures the basic appeal of the character.  It also beautifully elaborates on what was previously seen in the teaser.

Man of Steel seems to be offering a hero that is both literally and figuratively searching for a purpose on his adopted home world.  It also seems to be examining the moral dilemma of using ones abilities to serve a higher purpose, versus being able to live out a “normal” (and presumably more pleasant) existence.  That ties in beautifully with the messianic undertones of the Superman mythos.  However, I wonder if Snyder is up the task.  He’s a visual stylist, and even his best movies aren’t aren’t models of coherent storytelling.  That being said, the money shots in this trailer look absolutely wonderful, and I am now imbued with something that I was sorely lacking before: hope.