Sequels are often expected to be darker and more harrowing than their predecessors.  This is also true of immediate follow-ups to successful franchise reboots.  The notion is directly related to the trope of “sequel escalation.”  Sequels are generally meant to be “bigger and better.”  Hence, the stakes have to be raised.  This is usually achieved via the introduction an even more ruthless villain, preferably one who has a score to settle with the protagonist(s).  The Japanese teaser for Star Trek Into Darkness offers just that.  From the looks of things, it may be taking fans down a very familiar path. 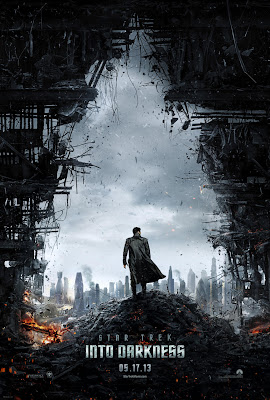 In Star Trek Into Darkness, the crew of the Enterprise is called back home.  Upon their arrival, they find that Starfleet has been decimated.  What’s more, the threat seems to have come from within.  As always, Captain Kirk and company face this new menace head on.  However, mere determination may not be enough, as this particular foe is more than formidable.

There’s a lot of speculation as to the true identity of the antagonist.  Benedict Cumberbatch is billed as Lt. Cdr. Gary Mitchell, but many suspect that he might actually be Khan Noonien Singh.  That theory is being met with skepticism in many circles, but a shot in the brand new teaser goes a long way in confirming it.  It has Kirk and Spock communicating through a pane of glass, with the latter flashing the Vulcan salute.  It’s a rather obvious callback to Spock’s death scene from Star Trek II: The Wrath of Kahn.  It might just be a bit subterfuge on Abrams part, but it’s much too early to tell at this point.

The rest of the trailer contains more than enough of the aforementioned darkness.  The Enterprise crash lands in a body of water.  Kirk and a companion run through what looks like a terraformed patch of land before leaping off a cliff.  A volcanic planet a la Mustafar is shown, and a character makes a wire assisted leap that would be right at home in a Wuxia film.  It all wreaks of urgency, and lets audiences know that a new and dangerous threat I son it’s way.  If Kahn definitely is the villain of the piece, this film might be facing an uphill battle.  However, with Abrams sitting at the controls, I’m willing to bet that it has a fighting chance.