Two years before the start of the civil war, a mysterious drifter makes his way through the Deep South.  When he happens upon a convoy of slaves, he takes it upon himself to violently free one of them.  Though courageous and charitable, this act of liberation does not come without a price.  The drifter, Dr. King Schultz (Christoph Waltz), is a professional bounty hunter searching for a band of killers.  Django Freeman (Jamie Foxx) is a slave who has encountered the men Schultz seeks.  In exchange for his help, Django will be granted ultimate freedom.  He will also be united with his wife Broomhilda (Kerry Washington), who remains in captivity.  Thus begins a violent odyssey which ends at the doorstep of decadent plantation owner Calvin Candie (Leonardo DiCaprio). 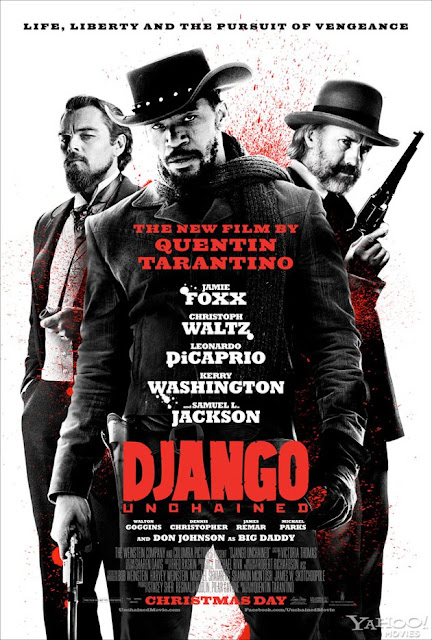 Django Unchained is Quentin Tarantino’s latest homage to the exploitation genres that have always inspired him.  Per the requirements of such films, it deals with a touchy subject in the most incendiary of ways.  It’s a spaghetti western that takes place against the backdrop of slavery.  Both the film and its protagonist are named after that of Sergio Corbucci’s ultraviolent sagebrush classic Django.  This would suggest that Quentin is gleefully digging into his usual bag of tricks.  However, he also engages in a bit of cinematic subterfuge. In almost every conceivable regard, Django Unchained is a film that remains constantly in flux.  Though it sometimes moves at snail’s pace, it is nonetheless sheds a number of skins  en route to its inevitable conclusion.

Beginning with Jackie Brown in 1997, Quentin Tarantino’s films have slowly become more visually dynamic.  While Django doesn’t halt that progress, it shows Quentin applying his steady and studied hand a bit more deliberately than before.  The song that plays over the opening credits is directly from Sergio Corbucci’s original Django, as is the typeface in which the credits are rendered.  Rapid zooms are used in abundance, and certain shots resemble comic book panels.  Such bravura choices stick out like a sore thumb at first, but become less and less noticeable as the film progresses.

Initially, the film plays as something of a buddy comedy.  This is admittedly jarring.  However, it’s all part of an induction process.  Tarantino slowly eases his audience into this harsh and treacherous world before unleashing it’s truly nightmarish aspects.  The stakes gradually become higher and the situation much more harrowing.  Nowhere is this more apparent than in the film’s depiction of slavery.  The atrocities shown become increasingly more ghastly.  After a while, the inhumanity of it all becomes not only apparent, but undeniable.  Tarantino pays special attention to the reactions of onlookers.  While slavers and plantation owners indulge their bloodlust, the truly evolved recoil in horror.

Tarantino extends that commentary to his audience.  He exposes them to various forms of violence, from torture to shootouts to brutal “Mandingo fights.”  He exploits each in variety of ways, causing the viewer to run the full gamut of emotional responses.  The torture scenes are indeed off putting, while the gunplay during the film’s final stretch is the very embodiment of catharsis.  By that point, Tarantino is clearly in awe of his hero, and that sentiment proves infectious by way of the iconography on display.

As the violence and brutality intensify, the characters and relationships become richer and more developed.  At first, Schultz and Django’s partnership vaguely recalls that of Tuco and Blondie from The Good, The Bad, and The Ugly (Sans the treachery and antagonism, of course).  It eventually takes on more of a teacher/student dynamic, with Schultz playing both benefactor and mentor.  Gradually, the tropes of such a relationship are subverted, and a role reversal takes place.  As Django becomes a more layered and complex hero, he is pushed farther and farther to the forefront of the proceedings.  His arc is deceptively subtle.

The film has a plethora of characters and performances that are every bit as colorful as Tarantino’s dialogue.  As Django, Jamie Foxx undergoes a metamorphosis that takes nearly three hours of screen time to complete.  That shows an amazing amount of patience as his part.  That patience pays off handsomely.   As Dr. King Schultz, Christoph Waltz displays a quiet dignity that is wisely never overstated.  Leonardo DiCaprio takes a decidedly scenery chewing turn as the vile Calvin Candie.  The boldness of his acting choices serves to expand his repertoire in many unexpected ways.  The same can be said of Samuel L. Jackson as Stephen, who can only be described as the most hateful house slave in the history of cinema.

Django Unchained is yet another wild ride through Tarantino’s cinematic universe.  As always, it’s filled with familiar sights, and lorded over by a grand (and at times overzealous) showman.  This time, the tour guide takes a detour through the darkest period of America’s existence.  Rocky though the ride may be, it proves to be a grand old time at the multiplex.  Django Unchained is like a fine, yet very strong liquor. It warms the palette and scalds the throat, all the while providing a more than adequate buzz.  This is Tarantino at his most bold and daring.  One can only wonder what he will conceive of next.