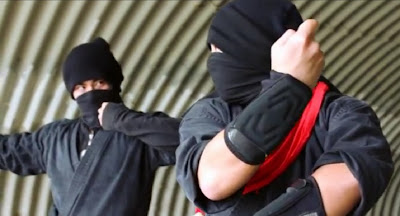 Day of the Ninja is a short film from Martial Club, a stunt/filmmaking team consisting of Andy Le, Brian Le, and Daniel Mah.  It was created in honor of the faux holiday declared by the creators of the parody website Ninja Burger.  The film takes itself about as seriously as its inspiration would suggest, though it only gradually reveals itself.

The opening moments of the film do a good job of concealing its true nature.  The Shaw Brothers fanfare accompanies the Martial Club logo.  It’s a fitting homage, considering that the name is taken from the Lau Kar Leung classic.  The opening text throws the viewer even further off the scent by being suitably ominous.  It actually leads one to think that the setting might be a mysterious wooded area in feudal Japan, or something else along such lines.

Much to the viewer’s surprise, the setting is actually a modern day park/playground.  Our hero isn’t wearing ninja gear, but Levis jeans and a hoodie.  As he approaches the tunnel mentioned in the opening text, a traditionally dressed ninja arrives.  The ninja’s appearance recalls such Schlocky IFD films productions as Ninja Terminator.  This is the first hint of the direction in which the film is actually headed.

The ninja configures his hands into what looks like a mudra hand sign, just before performing a bit of “magic multiplication.”  A second ninja warrior inexplicably appears from behind.  Little touches like that reveal the filmmakers to be well versed in ninja mythology, which is to the film’s benefit.

The fight choreography exudes speed and power.  The strikes are precise.  The way the ninja double team the hero recalls similar scenes from countless Japanese anime, as do the hairstyles on display.  It’s during the fights that Day of the Ninja reveals its true agenda: humor.

Day of the Ninja wonderfully subverts the “trial by fire” tropes found of period martial arts films.  Usually, when a hero is required to endure a ritualistic test of his abilities, it is presented in a grimly serious fashion.  The members of Martial Club have a bit of fun with the concept, slyly revealing the inherent silliness that lurks just beneath.