Namekian conqueror Piccolo (Michael Amariah) engages Saiyan warrior Raditz (Zack Nizato) in battle.  Raditz is ultimately defeated by Piccolo’s powerful Makanosappo technique.  As he lay dying, the Saiyan warrior sends a final transmission to his scouter, thus summoning his comrades Vegeta (Aaron Ly) and Nappa (Ryan Oliva).  When the Saiyans finally arrive, they are met by organized resistance in form of   Tien Shinan (David Cheung), Chiaotzu (Oliver Faber), Yamcha (Isky Fay), Krillin (Lee Edward Jones), Piccolo, and Kid Gohan (Brandon Ly).  Alas, even their combined efforts are no match for the destructive duo.  In a moment of desperation, Krillin calls on Raditz’ Goku (Peter Perelta), who arrives ready for battle.  Will he be able to save the day? 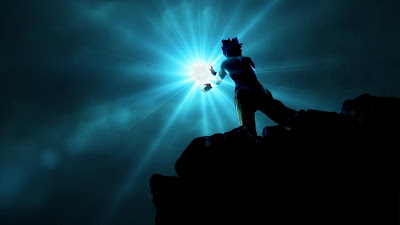 DragonBall Z - Saiyan Saga (DBZ Live Action Trailer) is a fan made “trailer” from K&K productions.  It mostly functions as a greatest hits compilation, recreating key moments from the fabled “Saiyan Saga” portion of Dragonball Z and organizing them into a highlight reel.  It pays tribute to the object of its affections, while offering much needed clarity to a cluttered narrative in a very short period of time.

The translation is about as literal as one could hope for.  The film’s remarkably literal rendition of Piccolo somehow manages not to come off as laughable.  The makeup and prosthetics department are painstakingly faithful to the original character design, and Michael Amariah commits to the role (Though his part mostly consists of menacing scowls).

Most of the action takes place beneath an overcast sky, and looks as though it was filmed through a translucent, aqua-hued filter.  This creates a “snow globe” effect which is further enhanced by the instances of slow motion during the fight scenes.  Immediately upon facing off with each other, the characters exhibit superhuman capabilities.  The way such feats are rendered recalls the Star Wars films, particularly the prequels.  The instances of superhuman speed feel appropriately cartoonish.
Ironically, the most visually effective moment is also the most simplistic.  While fighting Goku, Nappa throws a flurry of punches directly at the camera. It’s filmed in close-up and aided by speed ramping, as well as the appropriate sound effects.  It perfectly conveys the concepts of superhuman strength and speed as rendered in the Dragonball universe.

The trailer lays out the central concept of the series in very clear and coherent terms. Though based on the classical Chinese novel Journey to the West, Dragonball has never been the model of narrative coherence.  While that has always been a huge part of its charm, such qualities don’t lend themselves to successful feature film adaptations.  K&K productions deals with this by packaging the saga as a cross between a Wuxia film and an alien invasion flick.

Once again, a group of dedicated yet capable fans manage to upstage Hollywood.  With DragonBall Z - Saiyan Saga (DBZ Live Action Trailer) K&K productions shows that the gonzo energy of the property isn’t so difficult to harness.  One only has to strip it down to its bare essentials, and have faith that audience can suspend disblief.  I don’t know if that energy can be sustained for 82 minutes or more, but this trailer certainly gives me hope.