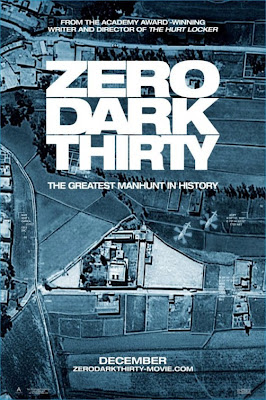 Zero Dark Thirty is the follow up to director Kathryn Bigelow's The Hurt Locker, which won top honors at the 82nd Academy Awards.  While the latter shows the Iraq War from the perspective of an Explosive Ordnance Disposal Team, the former offers a behind-the-scenes look at the worldwide hunt for Osama Bin Laden.  Though the troops aren’t left completely out of the picture, but they aren’t the sole focus this time out.  The story is told from the perspective of a female protagonist, which can be seen as a bit of meta-commentary on the part of Bigelow.  Her filmography consists mainly of genre films (action pictures) that appeal to a largely male audience.  In that sense, she can be considered a woman who chooses to play a man’s game.  Zero Dark Thirty can be seen as example of the toll such a thing takes, on a playing field where the stakes are much, much higher.

The film is shot in a somewhat different style from The Hurt Locker.  Picturesque shots, in which slow motion photography allows one to linger on the immense destruction wrought by bombs and the like, are not part of the visual palette this time out.  Hand held cameras allow for more of a “docudrama” feel.  This seems to be the preferred aesthetic for such films these days.  As such, it isn’t particularly memorable, nor is it a at all distracting.  The story gets told, albeit in fairly mundane manner.  This suggests that Bigelow was going after something considerably more subdued than what she was previously known for.  The visuals do get a bit more dynamic during the conclusion, but more on that later.

Bigelow comes from a background of action cinema.  Her early works, while not bona fide blockbusters, have amassed a loyal following among genre fans.  Zero Dark Thirty confirms the massive evolution suggested by The Hurt Locker.  Kathryn Bigelow has indeed “grown up.”  The subject matter remains the same, but the vantage point has changed.  While Point Break, Near Dark, and Strange Days all dealt with addiction and thrill-seeking, Zero Dark Thirty attempts to take such concepts to their logical conclusions.  Addiction gives way to obsession and burnout.  Orgasmic payoff only comes after much planning and fact checking.  When it finally happens, it can feel somewhat like a pyrrhic victory.

Being that Zero Dark Thirty isn’t an action film (Though the marketing materials might make it seem so), it doesn’t come with the more obvious thrills that one would expect.  There isn’t much action until the very end, though there are a number of surprises and “jump scares” strewn throughout.  However, when the action does arrive, it is truly something to behold.  Bigelow juxtaposes nearly complete darkness with first person POV shots as seen through night vision goggles.  The audience is made to see combat the way that soldiers get to see it, and not in a gimmicky sense.  The darkness is frustrating, disorienting, and ultimately…scary.  Bigelow is at the top of her game here, as she is able to find endless variations on the kinds of scenes that she mastered so long ago.

To say that Maya is the film’s Elliot Ness to Bin Laden’s Al Capone would seem to be an apt comparison.  However, she plays a much different role than history’s most celebrated Treasury officer.  While Maya is sometimes in field with the grunts, that’s not really her place.  She does the investigating, and provides the info needed to allow the grunts to do their thing.  In a nutshell, she’s the brains behind the brawn.  She’s content with that position, and Jessica Chastain invests the character with dogged determination.  She’s tough in a way that has nothing to do firing a gun.
The film’s major flaw is its excessive length.  The running time clocks in at slightly over two and a half hours, making the film a bit less than economical in terms of pacing and storytelling.  It’s not exactly bloated, but it tends to get repetitive at certain points.  20 minutes could easily have been cut without losing much.  However, the story being told is compelling nonetheless, and its handlers are obviously skilled in how they spin it.

Zero Dark Thirty is in no way a thrill ride, though it does have a thrilling moment or two.  Its protagonist is a woman driven by conviction and obligation, not adrenaline.  She’s put her all into this project, suffered great losses as a result, and now must see it through to the end.  Though sexual metaphors hardly seem appropriate at this juncture, that’s what immediately comes to mind.  The wait certainly pays off, for both the main character and the audience (and America at large, for that matter.).  However, the foreplay becomes excruciating after a point.  Zero Dark Thirty is a really good film that misses greatness due to its own hubris.