Django Unchained seems to be stacking up box office receipts and award nominations in about equal measure.  Far outpacing both, however, is the film’s penchant for controversy.  This time, the merchandising, rather than the film itself, is the problem.  As has long been the standard for films of all kinds, Django Unchained has inspired a line of collectible action figures, courtesy of The National Entertainment Collectibles Association, or NECA.  Each figure bears the name and likeness of its corresponding character. 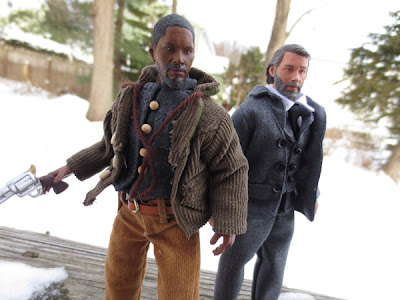 So-called activists are none too thrilled about this, and have taken action.  The first shot was fired by Najee Ali of Project Islamic Hope.  In conjunction with various “African American Community leaders,” he has called for a boycott of the figures.  According to him, “Selling slaves as action figures is a slap in the face of our ancestors. Tarantino and Weinstein didn’t have action figures for their movie ‘Inglorious Basterds’ because they know the Jewish community would never allow it and the African-American community shouldn’t allow anyone to disrespect our ancestors.”

Not to be outdone, Reverend Al Sharpton’s National Action Network has also called for a boycott.  The NAC’s president in Los Angeles, Rev. K.W. Tulloss, recently told The New York Daily News that "The movie is for adults, but these are action figures that appeal to children. We don't want other individuals to utilize them for their entertainment, to make a mockery of slavery."  To be fair, Mr. Ali actually endorsed the film itself while speaking alongside reverend Tulloss in Los Angeles:  "I actually enjoyed the movie, but we cannot support this type of commercialization," Ali said. "I don't see any dolls representing Hitler that came from Tarantino's (Holocaust movie Inglourious Basterds)...I don't see them making dolls of Holocaust survivors who are bald and starving in concentration camps."

Hyperbolic and inflammatory headlines have been popping up all over the net in regards to this controversy, with many a Black editorialist echoing the sentiments of Mr. Ali and Rev. Tulloss.  As always, the voice of Black fandom remains absent from the discussion.  As result, these discussions lack any sense of history, perspective, or context.  If there are no objections, I will attempt to remedy that.

Items such as NECA’s 8-inch pose-able Django Unchained action figures have long been a mainstay of the collectibles market, which has become vast and complex.  Toy and action figure lines are an integral part of movie merchandising, dating back at least to the dawn of the summer blockbuster.  The pratice was ushered in by Star Wars.  20th Century Fox famously signed away the film's merchandising rights to creator George Lucas, thinking them not worth much.  History has proven that decision myopic, to say the least.  Even before Star Wars, The Planet of the Apes films offered a bevy of merchandising tie-ins to young fans.

Of course, both Planet of the Apes and Star Wars skewed very young, as did their accompanying merchandise.  At the time, a precedent had yet to be set for such things in regards to more “adult” fare.  That changed with the release of Ridley Scott’s sci-fi/horror masterpiece Alien in 1979.  Kenner, the same company behind the mega-successful Star Wars action figure line, decided to give the same treatment to Alien.  In addition to a series of 3 3/4 inch figures of the film’s human characters, they issued an 18-inch figure of the film’s title creature. It came complete with a set of retractable jaws that emerged from its mouth like a forked rattlesnake tongue.  There was even a commercial for it.  As with the Star Wars toys, it was aimed at young children.

The 18-inch Alien figure instantly drew the ire of parents groups everywhere.  This was understandable, as the R-Rated film contained not only graphic violence, but also sexually analogous themes and imagery.  It soon disappeared from store shelves, and is now among the most sought after of collectibles.  On the 1979 edition of their “Holiday Gift Guide,” Siskel & Ebert famously condemned the toy.  While Kenner’s venture into undiscovered country didn’t go quite as well as planned, such experiments continued throughout the 1980’s.

The slasher film genre provided a number of violent anti-heroes, chief among which was Freddy Krueger.  As depicted in the Nightmare on Elm Street series, Krueger was a child murderer (and molester, per the 2010 reboot) who was burned alive by vengeful parents.  He then returned from the grave to kill the children of Elm Street in their dreams.  Despite his gruesome pedigree, the character became a fan favorite.  By the close of the 1980’s, he was among the most popular Halloween costumes.  His trademark clawed glove was sold in a “child-safe” plastic version.  The merchandising bonanza stopped when Matchbox issued a talking Freddy Krueger doll.  Again, parents groups took exception. Matchbox removed their logo from boxes before removing the toy from shelves entirely.  As of this writing, Freddy action figures are widely available from a number of companies, as is more realistic metallic version of his glove.

At the close of the 1980’s, Kenner again decided to give its lucrative treatment to an R-Rated property.  This time, they focused on Paul Verhoven’s sci-fi/action satire Robocop.  The film, which was among the most violent of its era, had to receive numerous cuts to avoid an X-Rating.  That didn’t stop Marvel comics from doing a comic book adaptation of the film, or putting out a syndicated cartoon.  Neither garnered much notice from watchdog groups.  As a result, Kenner’s Robocop and the Ultra Police toyline flew under the proverbial radar when it was released in 1989.

Two years later, Kenner brought Terminator 2: Judgment Day to store shelves everywhere.  In 1993, they gave the Alien franchise another shot, producing a line of figures and accessories based on its two Alien sequels.  Predator soon followed.  One year later, McFarlane Toys became an institution by targeting adult collectors with various figures based on horror and science fiction properties, many of which were R-Rated (and in some cases unrated).  Some of these toys depicted gruesome and graphically violent scenes.  They have since become a mainstay of the marketplace.

So just what changed between the late 1970’s and now?  Well, The nature of fandom, for one thing.  Fanboy/manchild culture is currently bigger than ever.  That growth occurred gradually throughout the last 40 or so years, and was spurred in large part by the early success of Lucas and Spielberg.  Lucas’s American Graffiti helped kick-off the baby boomer nostalgia market, paving the way for the television series Happy Days.  Star Wars did the same thing for the sci-fi and adventure serials of the 1940’s, as did Raiders of the Lost Ark.  Star Wars also showed that appeal for such things stretched far beyond the geek/manchild and well into the American mainstream.

Even before Lucas or Spielberg, J.R.R. Tolkien’s Lord of the Rings novels found a huge fanbase among the counter-culture set during the 1960’s due to their surreal imagery.  Stan Lee and Marvel comics had been targeting the college crowd during that period as well.  Gene Roddenberry’s Star Trek became much more popular in syndication than in its initial run on CBS, inspiring a fanbase that thrives to this very day.  Members of the baby boomer generation consumed all of the aforementioned properties heartily, becoming full-fledged fans in many cases.  As a result, it is now far less weird for adults to relive, or hold on to, their childhood.  Though this phenomenon has caused some to lament the infantilization of American culture, it has also created a huge demand for toys aimed squarely at the adult market, based on properties that are likewise aimed at adults.  This brings us back to Django Unchained.

The complaints about these toys revolve not only around the film’s subject matter, but the “questionable” handling of said subject matter, as well as the perceived audience for the film’s merchandise.  As stated above, Mr. Ali claims that “Weinstein didn’t have action figures for their movie ‘Inglorious Basterds’ because they know the Jewish community would never allow it.”  This is patently false.  In 2009, Hot Toys Limited put out a pair of highly detailed 12 inch (1/6 scale) action figures based on Tarantino’s war/adventure film.  One was of the film’s hero, Lt. Aldo Raine.  The other was of its villain, Nazi Colonel Hans Landa.

To put things even further into context, that wasn’t even the first time action figures of Nazi’s characters from popular films were made available.  In 1982, Kenner put out a line of Raiders of the Lost Ark action figures, two of which were Nazi characters from the film.  One was of the German mechanic that Indy fought near a plane.  The other was of the exceedingly creepy Nazi Gestapo interrogator Arnold Ernst Toht.  Unlike the figures for Django Unchained, these were most definitely aimed at kids.

Rev. K.W. Tulloss claims that the figures are made to appeal to children.  There’s absolutely no evidence to suggest that such a thing is true.  While action packed at points, Django Unchained is both dialogue-heavy and deliberately paced.  It’s also a period piece.  Not the kind of thing that young kids usually go in for, at least not to my knowledge.  Also, Django figures are mainly available via specialty shops and other such outlets for collectibles, all of which cater to a largely adult clientele.  They can’t be purchased at nationwide retail chains like Wal-Mart, Target, or Toys R Us.  As for the claim of NECA selling slaves?  Well, the figure of Django Freeman shows him in full bounty hunter mode.  Not to mention the fact that Django was actively a slave for all of a few minutes of the film’s opening sequence.

I respect the right of my fellow brothers and sisters to call out racism and injustice wherever it may rear its head.  Such is necessary to ensure that white supremacy does not prevail.  However, the furor over these figures is overblown, to say the least.  From where I’m sitting, the Django Unchained figures are not only part of a tradition, but appear to be in good company.  They don’t tarnish or trivialize the legacy of slavery any more than NECA’s action figures of Regan Macniel from The Exorcist trivialize demonic possession or exploit children.  That film showed a 12 year old girl violently masturbating with a crucifix, just before shoving her mother’s head into her bloody crotch.  Yet, it has inspired a couple of action figures, neither of which inspired as much as peep from parents or anyone else.  These are truly strange times we live in, folks.