On this week’s edition of Scottscope Talk Radio, the roundtable takes aim at Kathryn Bigelow’s latest, Zero Dark Thirty!  Is it as a worthy follow-up to The Hurt Locker?  Is it in the same class as her earlier work, or is it in a totally different class entirely?  Does it truly deserve all of the praise that is currently being heaped upon it?  Will it prevail at this year’s Oscars?  How realistic is it?  Does it accurately portray the hunt for Osama Bin Laden?  Will right-wing pundits dismiss it as yet another piece of Hollywood style left wing propaganda?  Does it actually have any obvious political affiliations? 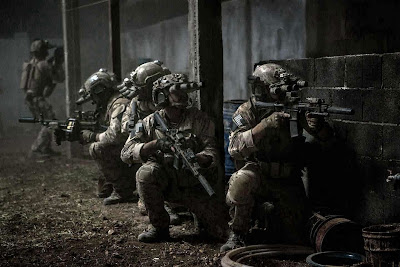 We’ll also be discussing the 2013 Oscar Nominees.  Did Quentin Tarantino get snubbed?  Why did only a white cast member from Django Unchained get nominated?  Why didn’t Jamie Foxx secure a nomination for his work in Django Unchained?  Why was Christophe Waltz the lone cast member nominated from Django Unchained?  Are the Academy Awards even relevant anymore?  Do they ever manage to make the “right” choice in regards to the major categories?  Should the general public care about what they like?  Do they matter any more than any of the other award shows, such as the Golden Globes, or the various critics’ circle awards?

We’ll also talk about the controversial statement that Quentin Tarantino made while backstage at the Golden Globes.  Is there ever context in which it would be okay for a white person to utter the dreaded N-word?  Is Tarantino racist, clueless, antagonistic, or simply bold?  Is this yet another in a long line of overblown controversies related in some way to Django Unchained?  Did Quentin make a valid point?  Is it time for the Black community to at long last put him in check?

Listen to internet radio with Scottscope on Blog Talk Radio
Posted by Unknown at 4:37 PM