As a group of office workers go about their daily routine, an undercover operative carries out a top secret mission.  After swindling a hi-tech device from a safe, he makes a mad dash for the nearest exit.  Though momentarily grounded by the building’s massive security force, he is able to break free.  Again, he has the finish line in sight.  However, the obstacles in his path have now increased exponentially.  Can he make it out of the gauntlet with the device, and his life, intact? 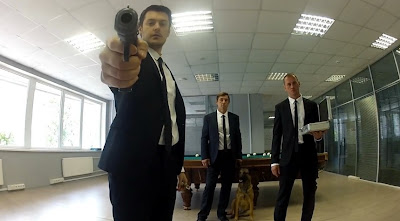 To describe the accompanying clip for Biting Elbows new single “Bad Motherfucker” as simply a music video doesn’t do it justice.  It’s a sequel to the epic short film Insane Office Escape, which itself served as the video for the band’s 2011 single “Stampede.”  Both films take their inspiration from a genre of video games known as First-person Shooters (FPS).  As such, they are both shot from the perspective of the protagonist.  Even aside from such obvious connections to wholly different mode of entertainment, “Bad Motherfucker” proves to be a truly breathless romp in its own right.

One of the biggest obstacles in adapting video games to film is the difficulty in transitioning from one medium to another.  Each has its own set of requirements and rules.  Film is something of a spectator sport.  The viewer accepts a passive role in the process, experiencing the story as it unfolds before them on the screen.  Video games, on the other hand, require participation.  They are to be played, not merely watched.  Their stories are meant to facilitate game play.

So how does one successfully bridge that gap?  Biting Elbows frontman Ilya Naishuller and post-production designer Sergey Valyaev manage to do so by way of escalation, pacing, and good old fashioned ingenuityThey turn up the volume considerably, all the while remaining true to the original vision they introduced two years ago with Stampede.

Right from the outset, it’s clear that the stakes have been raised this time out.  The action in “Stampede (Insane Office Escape)” consisted mostly of hand-to-hand combat and evasion maneuvers.  By contrast, “Bad Motherfucker” contains infinitely more gunplay and bloodshed.  Even the unarmed close quarters combat produces grisly results.  That sense of acceleration carries over to other aspects of the production as well.  The stunt work is more elaborate, and the scenery/location changes more rapidly.

The filmmakers also throw in a few sly film references for good measure.  The opening contains a darkly comic nod to the foot chase in Point Break.  The bad guys are reminiscent of the sentient programs from The Matrix trilogy in terms of their omnipresence.  They offer the hero no rest as they seem to materialize out of thin air, and appear around every corner.  They also bare a resemblance to the color coded bank robbers from Reservoir Dogs.  The way they assail the hero in endless waves is reminiscent John Woo’s classic Hong Kong shoot-em-ups.

Though “Bad Motherfucker” has clearly been planned and organized to the nth degree, it nonetheless feels improvised.  Per Indiana Jones famous line from Raiders of the Lost Ark, it often looks as though the hero is making it up as he goes.   There’s also some interesting slight-of-hand going on in terms of the editing.  Like Alfred Hitchcock’s Rope, the film is designed to appear as though it was entirely done in one take.  In actuality, the seams have been hidden through some very sly and strategically placed transitional shots.

Everything is viewed through the distortion of a fisheye lens.  This acts as a subconscious cue for the audience, and on multiple levels.  It lets them know that the world they have entered doesn’t operate according to real world physics.

The day may eventually come when some daring filmmaker manages to tell an entire feature length story in this fashion.  That day hasn’t arrived yet, but until it does, “Bad Motherfucker” provides a handy little template of how such a thing might be done.  After all, filmmakers have just about pushed the proverbial envelope as far as possible it can go in terms of action and thrills.  It makes sense that the next logical step would be to put the viewer in the proverbial driver’s seat, if not giving them the keys.

*I have embedded the videos for both “Stampede” and “Bad Motherfucker” below, as it is best to view them in chronological order, so as to have a better understanding the story arc that continues and concludes with the latter.