Just how did Luke Skywalker, a rebel pilot with no formal training or combat experience, manage to single-handedly destroy the Death Star during the Battle of Yavin?  It is a question that has plagued inquiring minds for over 35 years now.  Obi Won Kenobi would have one believe that boy did so by way of the force, that mystical energy field that binds all living things together.  Such thoughts are truly the rantings of crazy old man.  There’s got to something more underhanded, albeit more plausible, afoot.  An investigative journalist chooses to dig a bit deeper.  In doing so, he uncovers the truth behind the single biggest terrorist operation in galactic history. 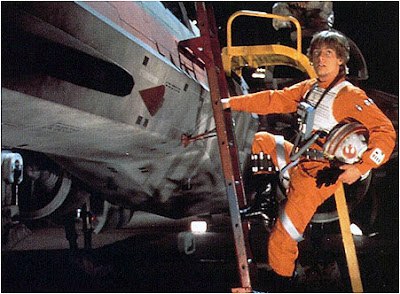 The new faux mini-documentary Luke’s Change: An Inside Job is a self-described “satirical spoof of the 9/11 Truther video Loose Change.  It supplants the 9/11 terrorist attacks with the Battle of Yavin from the original Star Wars.  The results are similarly outrageous (depending on your point of view), but nonetheless hilarious and even thought provoking.  It deviates from Star Wars canon by taking an alternative and more atheistic view of events.  It does so by, as a friend of mine keenly observed, taking the Force completely out of the equation.  It functions as a piece of imperial propaganda, not wholly dissimilar to the kind that regularly airs on Fox News.  The rebels are cast as terrorists, and Darth Vader merely as the “Overseeing manager and chief commanding officer” of the Death Star.  That’s certainly a far cry from “The Dark Lord of the Sith.”

Most startling is how convincing the film’s central argument is.  That’s the joy of it.  It makes you see the original film through different eyes.  I can almost imagine Han Solo buying whole heartedly into this line of reasoning.  After all, he was there, and he’s always been skeptical of the Force.  Luke’s victory was partially his doing, seeing as how he swooped in at the last minute to provide him with Cover fire.  Han returning to help out his pal in the nick of time couldn’t have been an act of divine intervention, could it?  The mind boggles at the prospect.  I’d love to see one of these done for every major event in the original trilogy.  It’s something that only a true fan could appreciate.