Young Mia (Jane Levy) has been caught in the throes of heroin addiction for far too long, and prior attempts to kick the habit have failed miserably.  As part of a self-imposed detoxification process, she retreats to a secluded cabin in the woods.  She’s accompanied by her friends Eric (Lou Taylor Pucci) and Olivia (Jessica Lucas).  Upon arrival, the trio is joined by Mia’s estranged older brother David (Shiloh Fernandez) and his girlfriend Natalie (Elizabeth Blackmore).  Things take a horrific turn when the Naturon Demonto (Aka The Necronomicon) is discovered in the cabin’s basement.  Soon after, a malevolent demon is unleashed upon the cabin’s inhabitants.  As the intended intervention turns into a night of unrelenting terror, Mia is forced to fight for her mortal soul. 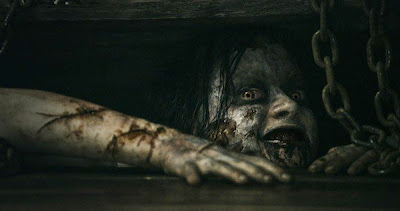 In the 30 plus years since the release of the The Evil Dead, Sam Raimi has since transcended his cult origins to become a purveyor of Hollywood Blockbusters.  Now, along with producing partners Robert Tapert and Bruce Campbell, he returns to his horror roots.  This time he serves in somewhat different capacity, having relinquished his status as chief auteur of the bloody universe he created.    First time director Fede Alvarez has been given the bullhorn, and the tone has changed considerably.  Unlike his benefactors, Mr. Alverez seeks to facilitate shocks and revulsion instead of laughs.

The delightfully manic tone of The Evil Dead felt very much like, per a good friend’s parlance, a “happy accident.”  It existed in some alternate universe where Chuck Jones and Friz Freling made horror films instead of animated Looney Tunes shorts.  That merging of seemingly contrary sensibilities manifested wonderfully in Raimi’s offbeat visuals.  By contrast, the remake is more akin to those of Platinum Dunes.  The forest is awash in pea soup fog during the daylight hours, giving such scenes the ambience of a Grimm’s fairy tale.  In her possessed state, Mia somewhat resembles the ghostly children often found in Japanese horror films such as The Grudge (Which was remade in 2004 by Raimi and company via Ghost House Pictures).

The opening act hints at much a deeper subtext with the conceit of Mia’s drug addiction.  Any such pretense is abandoned once the food colored Karo syrup starts to fly.  That’s truly a shame, as a fully developed subplot could have raised the dramatic stakes considerably.  Instead, the film resigns itself to being a well rendered geek show.  However disheartening that is, the results are impressive, if only from a technical standpoint.  Every inch of the cabin is strewn in viscera by films end.  The filmmakers wisely forgo CGI for practical FX.  Every drop of bloodletting is done in-camera.  Squeamish viewers are not offered the courtesy of cutaways, and absolutely nothing is left to the imagination.  Limbs are severed and implements are removed from gaping wounds, all in excruciating close-up.  How the film managed to pass muster with the MPAA in its current form is anyone’s guess.

Strangely, for all of the gleeful excess on display, the gore is never truly as disturbing.  By comparison, the bloodshed in Eli Roth’s two Hostel films resonated on a deeper level.  The same can be said for Rob Zombie’s films.  While none of the aforementioned are superior examples of horror cinema, both were truly unsettling.  Evil Dead never truly approaches that threshold.  There are ample shocks, but not much in the way of actual scares.  Campy though it may have been, the original managed to conjure its fair share of creepiness.  Such deficiencies notwithstanding, Evil Dead’s climax delivers on a purely visceral level.  It’s as if the filmmakers finally hit the pitch they’d been striving for all along.  It’s refreshing in how it employs Grand Guignol techniques with the conventions of action blockbusters.  It’s blatant but effective nonetheless.

Despite its supernatural/haunted house trappings, Evil Dead is similar in spirit to the glut of “torture porn” offerings that briefly overtook the horror genre during the last decade.  It completely eschews slapstick (or any other brand of humor) to revel in human suffering.  By contrast, the original managed to carve out its own unique identity on the strength of Sam Raimi’s visual ingenuity.  The remake is intended for a much broader demographic, yet it feels considerably more narrow in its focus.  It’s tailor made for attention deficient gorehounds.  Meanwhile, the original was rife with ambition and inventiveness, and was able to transcend its cult horror origins to extent.  The major difference between the two is the level of ambition on display.  One film functions well enough for what is, while the other surprised viewers by offering them a bit more than they initially expected.