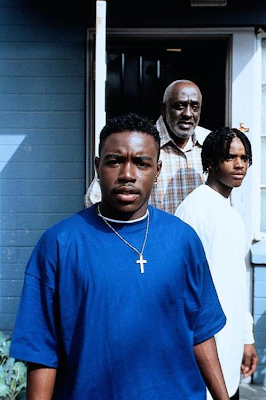 This devolution was documented by local rap artists, many of whom would eventually score major label contracts.  As the situation intensified, so did the nature of their music.  In the early to mid 1980’s, West Coast rappers were largely known for a brand of synthesized, uptempo dance music called “Electro.”  Though popular with partygoers and car stereo enthusiasts, Electro garnered little respect from Hip-Hop’s east coast pioneers.  During that time, a young man from Oakland had been setting the stage for a drastic change in course.  Todd Shaw was heavily influenced by the early recordings of Harlemite Spoonie G.  Spoonie’s raps emphasized his prowess with the ladies.  Shaw developed his own x-rated variant of that style.  He preferred funk to the “Disco Breaks” his east coast predecessors rapped over.  He began selling cassette tapes of homemade songs under the moniker Too $hort.  In 1982, he was profoundly inspired by the powerful social commentary of Grandmaster Flash & the Furious Five’s “The Message.”  He too would begin to incorporate such elements into his own songs, but with a twist.  Local hustlers had been specially requesting customized tapes from $hort.  These special order items would immortalize the lifestyles of the dealers that requested them.  $hort didn’t realize it, but he’d developed an early blueprint for something that would change rap music forever.

By the mid 1980’s, $hort was but one pioneer among many.  Down in southern California, L.A. rappers were slowly outgrowing Electro.  Ice-T, Toddy Tee, King-T, and eventually N.W.A formed the gaseous core of a forthcoming Big-Bang.  All had gang ties, at least to some extent.  They offered rap personas fashioned after gangbangers and crack dealers, in addition to crime narratives told form the first-person perspective.  Meanwhile, a similar evolution was unfolding in the Northeastern United States.  In 1985, Philadelphian Schooley D changed the game with his 1985 single, “P.S.K. What Does It Mean?”  The Bronx duo Boogie Down productions appeared on the cover of their 1987 debut Criminal Minded brandishing guns.  Brooklynite Just-Ice branded himself the “Hip-Hop Gangster.”  His songs offered X-rated tales similar to those of Too $hort.  He extolled the virtues of the Nation of Gods and Earths (aka The Five Percent Nation), a religious sect that is often characterized New York street gang.  All of these developments eventually brought forth a new subgenre: Gangsta Rap.  However, it was the west coast variant that would come to personify the form in the public eye.

By the early 1990’s, West Coast Gangsta rap was immensely popular.  Still, its practitioners seemed to sense something terrible on the horizon.  Their suspicions were confirmed by the beating of motorist Rodney King at the hands of the LAPD.  The City of Angels was coming apart at the seams, and now there was videotaped evidence of it.  Gangsta rappers weren’t rabble rousers, but prophets.  This was the story that hadn’t yet made it to the silver screen.  Black Angelenos of the early 1990’s had a lot in common with the European immigrants of Prohibition era Chicago.  Both were largely working class groups that had been marginalized by the American mainstream.  Both groups also contained a small subset that saw crime as a viable option.  Both eras had a particular vice that, once deemed illegal, provided the basis for a thriving underground economy.  With such economies comes extreme violence.  It was fertile thematic ground that had yet to be sown.  The “Tender Trio” sought to plant their flag.  Tyger Williams began crafting a screenplay titled Menace II Society.

The impending release of Boyz n the Hood had the trio fearing the worst.  Had some bespectacled USC graduate beaten them to the punch?  One of the first trailers for Boyz sold it as a “gang movie.”  Something like Colors, but told from the perspective of Black gangbangers.  Reports of violence at opening weekend screenings seemed to confirm that summation.  Yet, for all of its R-Rated trappings (Profanity, sex, nudity, violence), Boyz was essentially a tender coming-of-age story. Newly emboldened, the “Tender Trio” proceeded as planned.   In March of 1992, Tyger Williams found ample inspiration in American Me, a large scale opus about Chicano gang life.  It chronicled the rise of Montoya Santana (Edward James Olmos) from small-time gang leader to the undisputed boss of La eMe (The Mexican Mafia).  Williams revised his screenplay, turning out a much darker draft.  Edward James Olmos had shown him just how far down the proverbial rabbit hole a modern gangster film could go.  Williams was more than willing to take Black audiences on a similar journey, but would they accept the challenge?  Better yet, would any studio be bold enough to finance such a vision? 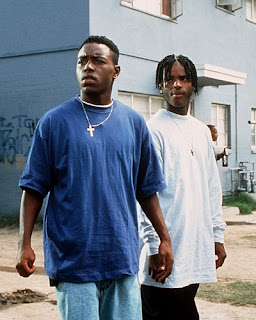