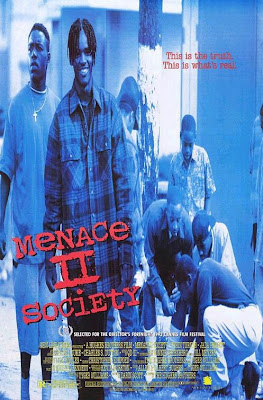 Right from the outset, Menace wears it’s ugliness on its sleeve.  As the broken sprocket logo of New Line Cinema appears onscreen, the audience is verbally assaulted:

O-Dogg (Larenz Tate): Hey, hey, nigga...is it gonna be some pussy in this motherfucker?
Caine (Tyrin Turner): Man, its gonna be a gang of ho's up in this motherfucker.  I’m going to the shit myself, god dammit.  Shit…
Beggar: Can y'all brothers spare some change?
O-Dogg: Hell naw!  Get the fuck out my face, fool!
Caine: Man, Fuck what he sayin.’  Remember that one bitch?!
O-Dogg: Man, that bitch was finer like a motherfucker!

When the logo disappears, the screen briefly goes black.  The characters who had just spoken remain hidden.  A gauntlet has been thrown down at the audience’s feet.  The obscenities they’ve just heard is but a taste of the world they are about to enter.  Those with weak constitutions should flee to the exit doors.

The camera’s lone eyelid suddenly pops open to reveal the interior of a small grocery store.  O-Dogg and Caine enter the right hand side of the frame.  Already, the audience is treated to the first of many visual affronts aimed squarely at conservative viewers.  O-Dogg’s hair is faded on the sides and plaited on the top.  He sports a “wife-beater” (White tank top T-shirt), khaki pants that sag well below his waist and reveal his underwear, and “biscuits” (cheap, comfortable “old man” shoes once favored by the Crips).  Sagging pants and braided hair have long been staples of prison culture.  Some believe them to be styles affected mainly by homosexual inmates.    Whatever the origins, such styles have engendered the wrath of both Black and White parents alike for decades now.  The Korean grocer’s wife serves as a surrogate for members of polite society.  She shadows the young men all over the store. 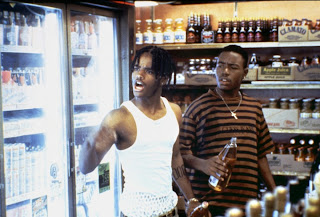 Caine and O-Dogg pay for their drinks.  As they walk away out the door, the grocer makes the fatal mistake of insulting O-Dogg.  The scene then goes into meltdown.  O-Dogg murders the grocer and his wife before stealing the store video surveillance tape and emptying the cash register.  Caine remains in a state of shock throughout.  He finally runs out of the store.   O-Dogg follows, but not before collecting his bottle of malt liquor.

As is the case with many of the most shocking moments in movie history, the scene is deceptively discrete.  Still, the visceral impact is undeniable.  The murders themselves happen off-screen.  Only a glimpse of the aftermath is shown.  The grocer’s dead body is seen bleeding out on the floor.  The audience experiences everything through Caine’s reaction.  Likewise, the murder of the grocer’s wife is heard on the soundtrack, but never actually seen.  A final warning has been sounded.  Anyone who chooses to keep watching after this point does so at their own peril.  All of the aforementioned takes place before the opening credits.  Not even five minutes have passed, and the horror show has already begun.
Subsequent moments of violence follow a similar progression.  Build-up is followed by pay off.  However, the “payoff” isn’t gratifying in the usual sense.  It’s designed to elicit a mixed emotional response from the viewer.  One character commits an act of violence while another watches in disbelief.   Other times, bystanders look on in horror as the carnage unfolds.  In fact, “horror” is the opportune word, as Menace often functions more like a horror film than anything else.  No one is safe.  The tide can turn at any time.  Predators can become prey, and friends can become enemies.  It’s the exact same rule set observed in the zombie films of George Romero, or the hit television series The Walking Dead.

The film also incorporates the logic of modern war films, particularly those about the conflict in Vietnam.  Oliver Stone’s Platoon shows a “civil war” between two opposing factions of an American platoon in South Vietnam.  This “civil war” plays out against the larger backdrop of their war against the North Vietnamese.  The film was inspired by real life “fragging” incidents.  Once could look at the many gang sets of South Central in a similar light.  Though many may fly the same flag (Crip or Blood), they still kill each other on site.

Caine’s descent into violent criminality follows a logical progression.  He starts life as a victim of circumstance.  Both of his parents are criminals.  At age 18, he becomes an accessory to murder and armed robbery thanks to O-Dogg.  From there, his role becomes more active. He’s shown selling crack.  He also exacts violent revenge for his Cousin Harold’s murder.  A failed carjacking lands him in jail for the first time.  Once released, he resorts to armed robbery.  All of this occurs during the course of his first summer as a legal adult.

Throughout this descent, Caine is deprived of any easy answers.  His choices can often be understood, if not condoned.  For instance, he had no idea whatsoever that O-Dogg would murder the grocer and his wife before robbing their store.  Once the dye is cast, Caine’s is left with few real choices.  He can’t turn to the police.  Where’s he’s from, being branded a snitch is an automatic death sentence.  Simply cutting ties with O-Dogg can have similar consequences.  His Cousin Harold’s murder poses a similar conundrum.  An overworked and racist police force could care less about Black males killing each other.  The same goes for the judicial system.  Street justice suddenly becomes a viable option for Caine.

The conceit of O-Dogg’s “robbery tape” is both timely and prophetic.  He not only watches it tape for his own enjoyment, but circulates it among his peers (Much to Caine’s dismay).   This plays into the urban myth of “snuff” films.  It also anticipates the rise of “Shock sites” like WorldstarHipHop.  These days, antisocial youth are more than willing to risk criminal prosecution for their 15 minutes of fame.

The differences between Menace and Boyz n the Hood boil down to a handful of subtle yet crucial nuances.   In Boyz, Tre Styles (Cuba Gooding Jr.) successfully navigates his way through the hood.  He does so largely with the help of his father and the public education system.  By contrast, Caine has no such advantages.  This has caused detractors of Menace to overstate it bleakness.  A closer look reveals a tiny glimmer of light at end of the tunnel:  Ronnie’s son Anthony (Julian Roy Doster).

Anthony’s escape comes through Caine’s redemption.  This arch plays out through the use of parallelism and contrasts.   Just after the opening credits, a five year old Caine sneaks out of his bedroom.   He crashes a “welcome home” party that his parents are throwing for a family friend.   The friend in question has just been released from prison.  In the back yard, Pernell (Glenn Plummer) gives Caine his very first taste of liquor.  A little later, Caine sees his father (Samuel L. Jackson) kill a man over an unpaid debt.  The victim is the party’s guest of honor.

Flash forward thirteen years later.   Ronnie (Jada Pinkett) hosts a going away party.  She’s scored a secretarial job in Atlanta.    Anthony crashes the party, just as Caine did 13 years earlier.  O-Dogg tries to give the boy a sip of malt liquor, but Caine stops him.  This illustrates the difference between Caine and Pernell.  Just after this, Ronnie has a private moment with Caine, during which the two finally consummate their love.   Later on, Chauncy (Clifton Powell) makes a drunken and aggressive sexual overture to Ronnie.  Having already given Chauncy a friendly warning about such behavior, Caine pistol whips the man within an inch of his life.  Anthony witnesses the event.  That Caine does not kill Chauncy illustrates the difference between him and his maternal father.  Tat Lawson killed over an unpaid debt, while Caine Lawson fought to protect the woman he loved.

During the climactic drive-by shooting, Caine fulfills his ultimate purpose.  As his killers open fire from their vehicle, Caine’s torso is riddled with bullets.  Instead of taking cover, he runs toward Anthony, who peddles his big wheel right into the line of fire.  Caine’s final earthly act is to protect the boy from harm.  He succeeds, but at the cost of his own life.  He pays the price for his sins, but dies with a measure of honor.  His debt is paid.  Anthony is allowed safe passage from the hood.  It’s not unlike the sacrifice that Darth Vader/Anakin Skywalker makes for his son, Luke Skywalker at the end of Return of the Jedi.

Caine’s death also brings the cycle of violence in the Lawson family to an end.  Tat Lawson was a ruthless killer who died in a drug deal.  Pernell then became Caine’s surrogate father.  He also fathers Anthony before going to prison himself.  Caine Lawson grows up to be a violent criminal, but retains a modicum of humanity.  He doesn’t allow Anthony to be consumed by that same cycle. Consequently, Anthony will likely grow up to a better man than Tat, Pernell, or Caine.