Menace II Society could easily have been nothing more than a crude example of Cinéma vérité.  Thankfully, Tyger Williams and the Hughes brothers had learned well during their formative years as movie buffs.  In channeling those influences, they applied their respective talents.  Albert clearly absorbed the bravura camera maneuvers of Michael Ballhaus, Director of Photography on Goodfellas.  He’d also inherited Brian De Palma’s sense of visual grandeur.  The aforementioned are all spiritual godfathers to the Hughes brothers.  Those roots run much deeper than many realize.


The seminal “hood” films of the early 1990’s owe a huge debt to the seminal gangster films of the 30’s and 40’s.  Both forms have much in common.  Movies like The Public Enemy, Little Ceaser, and Scarface drew the ire of parents and censors alike upon release.  Though they were often packaged as morality plays, they were considered highly subversive.  The filmmakers behind them were hobbled by the restrictions of the day. Those restrictions became even more stifling after the onset of the Motion Picture Production Code aka the “Hayes Code,” a moral censorship guideline enforced by then MPPDA (Motion Picture Producers and Distributors of America)president Will H. Hays.

Some of these films have actually been referenced in hood flicks.  In Menace, Caine watches the 1948 film noir He Walked by Night on TV while recovering from a gunshot wound in the hospital.  The film was loosely based on the exploits of Erwin "Machine-Gun" Walker, a former employee for the Glendale Police Department turned criminal.  The story is presented in a pseudo-realistic docudrama fashion.  Its antihero, Roy Morgan (Basehart), gets his comeuppance.  Menace also presents the story of a crime spree in a realistic fashion.  Likewise, Caine pays for his sins at journey’s end.  Of course, Caine had many real world counterparts who died in anonymity, much unlike Erwin Walker.

Ernest Dickerson’s Juice had a similar moment.  While playing hooky, the “Wrecking Crew” hole up in member Steel’s apartment.   With a 40 ounce in hand, Roland Bishop intensely watches White Heat on television.   He cheers on the film’s antihero, Cody Jarrett (James Cagney).  Bishop clearly admires and relates to Jarrett.  The moment plays as meta-commentary.   The audience watches a fictional character on a movie screen watching yet another fictional character on a television screen.  Cody Jarrett exerts an obviously negative influence on Bishop.  That’s the kind of influence that Black parents feared Bishop might exert on their children.  That kind of hysteria caused Paramount pictures to change the poster art for Juice, which showed Bishop cradling a .38 revolver.  The gun was later airbrushed out.

Cody Jarrett dies in a literal blaze of glory, choosing to take himself out before the cops can.  Bishop dies a much less ceremonious death, one not brought about by his own hands.  It’s an eerie bit of foreshadowing, not only for Bishop, but for Tupac himself.  As Bishop was influenced by Jarrett, so Tupac was influenced by Bishop.  All three met tragic ends.

By the late 1960’s, the studio system had crashed, and the “Hayes Code” was soon abandoned.  On November 1st, 1968, MPAA president Jack Valenti instituted a voluntary film rating system that is still in place today.  One of the first filmmakers daring enough to test the boundaries of this new system was madman Sam Peckinpah.  His 1969 revisionist western The Wild Bunch forever changed gun violence in movies.  Peckinpah’s use of slow motion, camera coverage from multiple angles, and profuse bloodletting was revolutionary.  It profoundly impacted Martin Scorcese, and would be heavily imitated by both Walter Hill and John Woo.

Menace also benefits from the innovations of Peckinpah, most notably during its bullet riddled climax.  Caine does the infamous “dance of death” as he is gunned down.  Bullet entry wounds explode from his torso.  In The Wild Bunch, Peckinpah wanted to outdo the blood soaked climax of Arthur Penn’s Bonnie and Clyde.  He had his special FX technicians fill their “squibs” (Simulated bullet hits made from smokeless powder, stage blood, and condoms) with chicken parts and extra stage blood.  The Hughes brothers use similar tactics.  The application proves all too effective.

The level of violence in Menace is surely considerable.  Bullets tear through flesh, leaving gaping wounds in their wake.  Blood spews, streams, and splatters.  That being said, there’s nothing in Menace that one wouldn’t also see in the R-rated action films of that era.  Alas, the MPAA did not see it that way.  A good many cuts had to be made for the film to avoid an NC-17 rating.  A “prison riot” sequence was excised.  Less than two years after the release of Menace, The Wild Bunch was itself rereleased.  It was also rerated NC-17 (From its original rating of R) by the MPAA.  It seems that Allen and Albert were in good company after all.

The Hughes brothers have often cited Goodfellas as the blueprint for Menace.  However, Menace has more in common with a much earlier Scorcese film. Released in 1973, Mean Streets was Scorcese’s breakthrough feature.  It was the first entry in his “wiseguy” trilogy (Goodfellas was the second).  The film is set in the “Little Italy” section of Manhattan, and tells the story of low level hoods who meet a tragic end.  Like Menace, Mean Streets announced the arrival of a bold new talent.  Just as the Hughes brothers were influenced by Scorcese, Scorcese himself was heavily influenced by the French New Wave.

Ten years after Mean Streets, De Palma put his unique stamp on the crime genre with a remake of Scarface.  The filmmaker had experience with B-level horror films.   He also had an affinity for Hitchcock.  His version of Scarface is a weird mix of high art and shameless exploitation.  To a degree, it anticipated the onset of the crack epidemic.  Menace is one of it's progeny.

The genealogical link between Mean Streets, Scarface, Goodfellas, and Menace is most readily apparent in the character of O-Dogg.  He’s cut from the same cloth as Tommy Devito (Joe Pesci) and Johnny Boy (Robert De Niro).  All three are the “loose cannons” of their respective crews.  Johnny Boy is a degenerate gambler who’d rather pull guns than pay debts.  Tommy, an aspiring wiseguy, is a sociopath with a Napoleon Complex.  Neither would be able to survive outside the confines of their native environment.  The exact same can be said of O-Dogg.  In fact, O-Dogg’s not just a product of his environment, but a living embodiment of it.  So effective was Larenz Tate in this role, that many still think him to be an actual Grape Street Crip.

The influence of Menace stretches well beyond the confines of “hood” films.  One only has to look at Fernando Meirelles’ Oscar nominated 2002 Brazilian crime film City of God for proof.  The influence of Menace, Goodfellas, and Pulp Fiction can be seen throughout.  Zé "Lil Zé" Pequeno (Leandro Firmino da Hora) is the O-Dogg of the favellas.

The influence of Menace has manifested in another way.  During the climax, O-Dogg famously holds his semiautomatic pistol sideways while firing it at Caine’s killers.  He also punctuates each discharge by thrusting his hand forward in a punching motion, as though his fist is a firing pin for a larger mechanism.  It’s phallic, yet undeniably cool.  That little nuance has since become a cliché.  Variations of it have since been used in films such as The Usual Suspects, The Negotiator, Desperado, and Collateral.  It was very recently referenced in a season 2 episode of The Walking Dead.

If Boyz n the Hood is the alpha of hood films, Menace II Society is surely the omega.  It simply couldn’t be outdone in terms of style, ferocity, or impact.  It remained alone at the top for nearly a decade.  City of God now stands as its equal, if not its better.  That it took so long for someone to finally match the Hughes brothers at their own game really says something.  That it ultimately took a foreign filmmaker making an epic about a foreign “hood” says even more.  Regardless of where it currently ranks, Menace II Society still stands as monumental achievement.  After 20 years, it still retains the power to shock any audience member, no matter how jaded.   To regard Menace as merely a “hood” film is an insult.  It’s an ultraviolent cautionary tale for the ages. 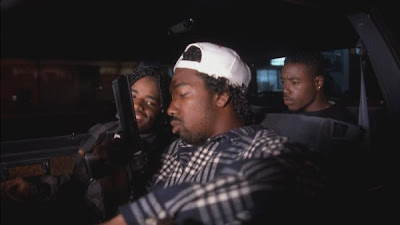