Captain James T. Kirk (Chris Pine) has officially worn out his welcome.  Starfleet has grown quite weary of his blatant disregard for protocol.  Unfortunately, there are far more pressing matters afoot.  A mysterious new enemy (Benedict Cumberbatch) has declared all-out war on the federation.  Kirk is given clearance to seek out him out and destroy him if necessary.    With the crew of the U.S.S Enterprise in tow, he sets course for the Klingon home world.  Together, they will engage a foe unlike any they have ever faced. 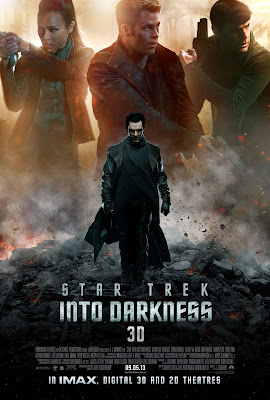 Star Trek Into Darkness is the direct sequel to J.J. Abrams successful franchise reboot.  It’s also the 12th Star Trek film.  This time out, the proceedings aren’t without a certain feeling of Déjà vu.  That’s to be expected with a sequel.  However, Abrams sticks a bit closer to cannon this time out.  Before, he sought to wipe the slate clean and start anew.  This time he recycles and reinterprets past ideas. Thankfully, such pilfering does not hinder the film’s entertainment value.

Just as before, Star Trek Into Darkness bares all of Abrams’ visual trademarks.  The ever present lens flares are a given at this point.  The framing and use of space emphasizes closeness of proximity.  That sense of spatial economy heightens the intensity of the verbal exchanges.  Every situation presented rings with immediacy.  Abrams has also grown bolder with his stylistic flourishes.  Subtitles appear at the lower corners of the screen rather than in the middle, as do timestamps.  It’s a more refined approximation of the latter part of Tony Scott’s filmography.  Though effective, it often comes off more like a frenzied distraction than a deliberate nuance.

Abrams takes an adventure serial approach to the action that might be better suited for his upcoming Star Wars film.  He stresses forward momentum at the expense of all else.  Like the films visual style, this plays as a diversionary tactic.  Save for a nice little game of “dodge the space debris” (which plays a call back to The Empire Strikes Back) most of the set pieces feel indistinct.  That’s not to say that any are substandard, just that many of them don’t really stand out.  Like Spielberg, Abrams is deathly afraid of boring his audience.  I can hardly blame him for that, but just a little more ingenuity wouldn’t have hurt.

From a screenwriting standpoint, Star Trek into Darkness might’ve benefited from one less cook in the kitchen.  There are a number of inverted callbacks to an earlier franchise entry.  As with so many of today’s blockbusters, the overly convoluted plot relies too heavily on twists and surprises.  The villain’s scheme is needlessly complicated. He isn’t just cunning, but conveniently psychic.  The same goes for the crew of the U.S.S Enterprise.  When characters should be able to anticipate each other’s moves, their aforementioned psychic abilities inexplicably fail them.  The internal logic is inconsistent, and nearly derails the film at certain points.

Like its predecessor, Into Darkness succeeds largely on the strength of its cast.  Supporting members have reduced their characterizations to an amusing short hand.  The trio of Kirk, Spock, and Uhura is given the spotlight.  All three bring their A-Game.  Zachary Quinto brings a penetrable humanity to Spock.  Benedict Cumberbatch makes a compelling villain, the true identity of whom will be obvious to devout Trekkies.  The film’s conception of him owes much to Ridley Scott’s Alien.  He’s an amalgam of the android Ash and the xenomorph.  That comparison may sound farfetched, but it makes sense upon closer analysis.

Star Trek Into Darkness does its job efficiently.  It allows the current cinematic iteration of the franchise to survive just a little while longer.  It looks great while zooming past the viewer at highway level speeds.  However, it doesn’t stop long enough for one to appreciate the craftsmanship.  That is by design, because the product is obviously flawed. Abrams needs to slow down a bit and pay more attention to detail.  Star Trek has endured on the strength of its ideas and concepts.  A Star Trek movie shouldn’t just be an amusement.  It should truly resonate on a deeper level.