Amazing Attractions: 'The Larry Davis Project' (The Life & Death Of A Bronx Rebel)

On November 19th, 1986, a raiding party consisting of 27 New York City police officers and detectives converged on an apartment building in the Morrisania section of the Bronx.  Their target was Larry Davis, a supposedly violent criminal laying low in his sister’s apartment.  Davis was wanted for questioning in regards to the murders of four suspected drug dealers.  Shortly after the nine-man raiding party entered the domicile, a violent gun battle ensued.  Davis, armed with a 16-gauge sawed-off shotgun and a .45 caliber semi-automatic pistol, wounded six officers before making his escape.  He then evaded capture for 17 days, ultimately surrendering to authorities after holding a family hostage.  Davis maintained that the NYPD was out to get him because of his intimate knowledge of their corrupt practices, and that the raid was actually an assassination attempt.  Miraculously, he was acquitted of all charges except for weapons possession.  However, he was ultimately charged and convicted of yet another murder.  On February 20th, 2008, while serving out a sentence of 25 years to life at Shawangunk prison, Davis was stabbed to death by another inmate. 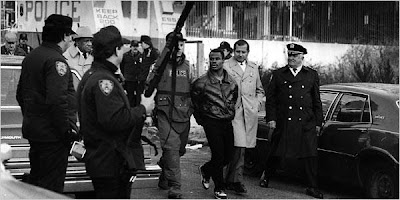