Political prisoner Yuri Komarov (Sebastian Koch) languishes in a Moscow prison cell, patiently awaiting his day in court.  His only obstacle is the corrupt government official Chagarin (Sergei Kolesnikov), who constantly pressures him to hand over a secret file.  When such efforts prove fruitless, he resorts to more drastic measures. Elsewhere, Jack McClane (Jai Courtney) suddenly finds himself at the mercy of Moscow’s judicial system.  Half a world away, John McClane (Bruce Willis) learns of his son’s plight and immediately travels to Moscow.  Upon his arrival, both Jack and Yuri sit in a courthouse holding pen.  Before any legal proceedings can begin, the building is bombed.  Jack and Yuri make an escape amidst the chaos.  They are nearly intercepted by the perpetrators of the attack when John intervenes.  The trio then spends the foreseeable future evading capture.  Can John salvage his relationship with his son amidst endless barrages of gunfire? 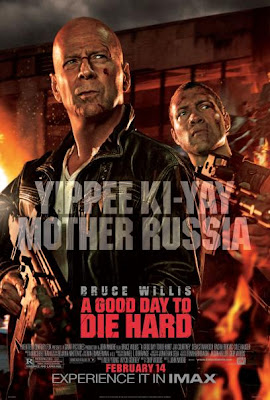