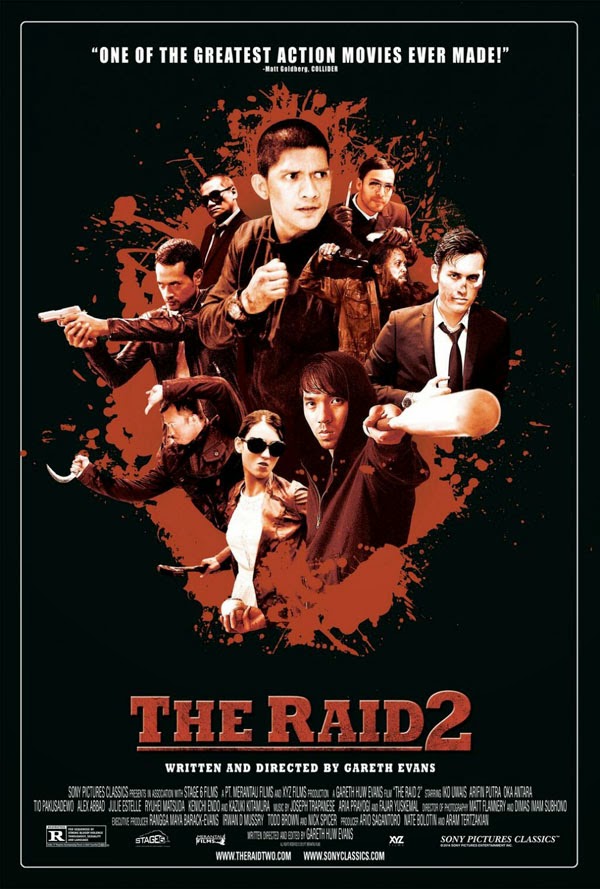 Ideally, a good sequel should build on the sturdy foundation laid by its predecessor.  The story should be taken into new and uncharted territory.  By journey’s end, both the characters and the world they inhabit should exhibit a newfound level of depth.  If his latest work is any indication, writer/director Gareth Evans staunchly adheres to such principles.  With The Raid 2: Berandal, the franchise undergoes a rapid yet prodigious expansion.  Evans builds an entire universe of crime and cruelty around his embattled hero, plunging him headlong into a literal and figurative hell.  In doing so, he engages his audience in an epic stand-off.

Though technically a high-concept B-Movie, The Raid: Redemption drew from an eclectic palette of influences.  Though equally indebted to a number genres and mediums (Modern zombie films and “Survival Horror” video games, to name a few) it is most easily (IE lazily) categorized as simply a “Martial arts” film.  The Raid 2 is equally deceptive in both guise and presentation.  However, it draws inspiration from an even smaller group of closely related film genres.  Evans directly channels the spirit of “Heroic Bloodshed’ and its many architects, namely Chang Cheh, John Woo, Ringo Lam, Johnnie To, and Wilson Yip.  He also pays tribute to the modern crime epics of 70’s “Brat Packers Francis Ford Coppola and Brian De Palma.

The film’s pre-title card scene serves as its visual mission statement.  The audience is treated to a bird’s eye view of a sugar cane field.  This shot is wholly unlike anything one might’ve scene in The Raid: Redemption.  The viewers’ attention is immediately drawn to the southeastern corner of the screen, where human characters mill about.  The camera hovers in the air before descending to earth to witness the carnage.  The message here is simple.  While The Raid 2 will most certainly provide what audiences have paid to see, the mode of delivery is has changed.

Such visual detours continue throughout the film.  Like its main character, The Raid 2 establishes and maintains a dual identity throughout its running time.  Both personalities are made to coexist in what amounts to a volatile, yet compelling union.   Evans, along with cinematographers Matt Flannery and Dimas Imam Subhono, simultaneously place these characters on both a psychiatrist’s couch and an autopsy table.    All of the action was documented (and I mean that quite literally) with the durable and versatile GoPro camera.  It’s strung through every imaginable crack and crevice, so as to place the viewer right in the thick of the action.  Everything else was filmed with an RED camera.

That duality also manifests itself in the film’s use, and presentation, of violence.  The Raid 2 can almost be considered a meditation on movie violence; specifically how it can be used to illicit any number of reactions from the audience.  For instance, the bloodletting isn’t relegated solely to the action scenes.  Even some of the slower stretches are strewn with viscera.  A quadruple execution is framed and shot in such a way as to suggest a Grand Guignol performance.  The actors seem subconsciously aware of the movie going patrons watching their every move.  Yet, the characters remain firmly on an existential plain.  The fourth wall remains intact, but is rendered transparent. 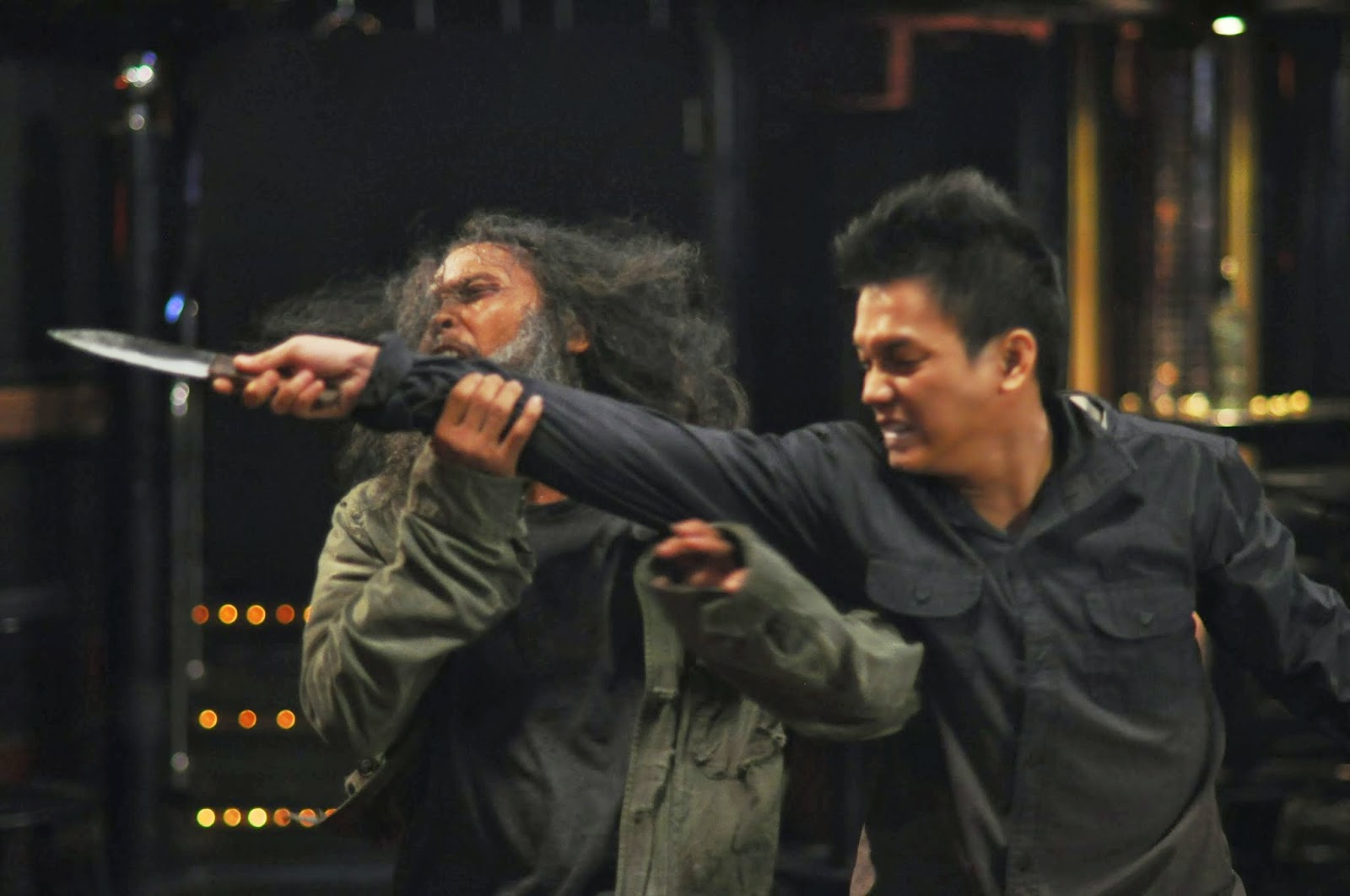 Evans also uses violence to confound and tease his audience.  The film’s inaugural fight scene is frustratingly anti-climactic. Soon after, Evans rectifies this by seemingly violating a cardinal rule of cinema: Always show, never tell.  The resulting frustration adds a bit of tension to everything that follows.  The viewer is placed off-balance, expecting a fix they may never get.  Ultimately, the film does deliver the proverbial goods, but administers them like a hotshot of heroin.  The action set-pieces often boil over into outright savagery and sadism, catering to the basest instincts of the audience before summarily punishing them.  The horrific aftermath of every blow struck and every shot fired is shown.   Bones are broken, tendons and arteries are sliced.  Rama is more of a fearsome survivor than a heroic savior. This adds another level of tension.  The viewer begins to anticipate every action scene with a mixture of anticipation and dread.

Given the plot, The Raid 2 bares many obvious similarities to Hard Boiled, City on Fire, and the Infernal Affairs trilogy.  Rama’s personal journey has a strong resemblance to those of ronin Kuwabatake Sanjuro (Toshiro Mifune) in Yojimbo, and Joe the foreigner (aka The Man with No Name) in A Fistful of Dollars.  However, while Kuwabatake and Joe were both opportunists and manipulators, Rama is a reluctant pawn in a violent charade.  In actuality, his odyssey more closely resembles that of Ma Yongzhen’s (Kuan Tai Chen) in Boxer from Shantung.  Rama’s martial skills are highly coveted by his prospective employers.  He obliges them only to complete his mission.

Thankfully, the lofty ambitions of The Raid 2 are shared by its cast.  In The Raid: Redemption, Rama was both an audience surrogate and a sturdy archetype.  This time, Iko Uwais is given a full-fledged character to inhabit.  He proves himself to be more than just a skilled physical performer.  Arifin Putra delivers the films most assured and confident performance as Uco.  Even the supporting players give memorable turns.

The Raid 2: Berandal is a cinematic trial-by-fire.  Gareth Evans tests the true resolve of his audience, requiring them to be more than mere spectators and voyeurs.  He forces them to partake in both the pleasure and the pain of it all.  This film exacts a hefty price, but one that is worth paying.  For all of its unrelenting ugliness, The Raid 2 is an unmitigated masterpiece.  By choosing to walk a well-traveled path, Evans shows that there is still much to see, if only we have the stomach for it.  The squeamish will recoil in horror, while true genre aficionados will soldier on.